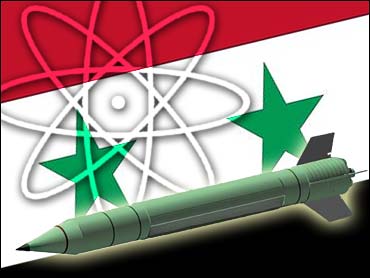 This story was filed by CBS News' George Baghdadi, reporting from Damascus.

Syria on Thursday strongly denied Israeli charges that it was transferring Scud missiles to the Lebanese Hezbollah militant group, calling the allegation an attempt by the Jewish state to disguise their intention to launch a new war in the region.

"For some time, Israel has been running a campaign claiming that Syria has been supplying Hezbollah with Scud missiles in Lebanon," a foreign ministry statement said.

"Syria strongly denies these allegations which are an attempt by Israel to raise tensions in the region," the statement added.

"Israel is seeking to create a climate that will pave the way for an eventual Israeli aggression to avoid responding to the requirements of a just and comprehensive peace," said the statement, carried by the government-run Syrian Arab News Agency.

U.S. intelligence officials told CBS News on Wednesday that Israel's claims were legitimate, and that Syria had in fact transferred Scuds to Hezbollah, which is based in Lebanon but has the backing of Iran's ruling clerics. No further details were provided.

The Syrian embassy in Washington also vehemently denied the accusation as an Israeli attempt "to divert global attention" from settlement construction, its occupation of Arab land, its assumed nuclear arsenal and its "continuous arming" with U.S. weaponry.

The United States voiced alarm about the Israeli reports on Wednesday, warning any such deliveries to Hezbollah would put Lebanon at "significant risk."

If Syria was in fact transferring such advanced weapons to Hezbollah, "this would put pressure on Washington to move fast and bring Israel and Syria back to direct peace talks, frozen since 2000," according to an analyst who spoke to CBS News on the condition of anonymity.

If Hezbollah -- deemed a terrorist organization by the U.S. government -- actually acquired Scud missiles, the weapons' accuracy and long range would put most, if not all Israeli cities easily within the group's reach.

President Obama's nominee to become the first U.S. Ambassador to Syria in more than five years received majority backing Tuesday in a vote by the Senate Foreign Relations Committee.