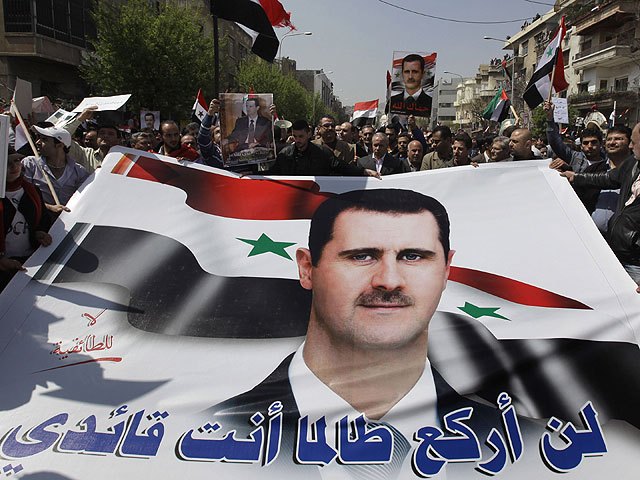 BEIRUT - Two Americans detained at the outbreak of political unrest in Syria were released Friday after two weeks in custody, said a relative of one of them and American officials.

Both Americans — a Vermont college student studying Arabic in Syria and an engineer from Austin, Texas, who had been working in the country — were arrested while taking photographs of demonstrations on March 18, according to Syrian state media.

The protesters, whose campaign is related to the wave of unrest across the Arab world, are demanding political reforms from one of the region's most repressive regimes. Syria's government-run TV has been blaming foreigners, among others, for the unrest. And President Bashar Assad this week said the turmoil was the result of a "foreign conspiracy."

One of the Americans, 32-year-old engineer Mohammed Radwan, was accused of selling photos and video of demonstrations to a Colombian woman, according to the state-run news agency. On the day he was detained, Radwan had Tweeted that he was at a mosque in Damascus where security forces were clashing with anti-government protesters, according to a cousin, Tarek Shalaby.

Syria's state news agency had said Radwan also confessed to visiting Israel. Syria is formally at war with the Jewish state, and visiting Israel is considered taboo. The accusation is sometimes used as a hint that they believe the person is a spy.

Shalaby said Friday his cousin was planning to fly to Cairo. Radwan, who is from Austin, Texas, also has Egyptian citizenship.

The other American, Pathik Root, is a 21-year-old student at Middlebury College from Ripton, Vermont.

He had been studying Arabic in Damascus as part of a program through Damascus University.

Patrick Leahy, a Democratic U.S. senator who was working to resolve the situation, received word from the Syrian ambassador to Washington that Root had been released, said John Goodrow, an official at the senator's Vermont office.

Root was in the process of obtaining an exit permit and was expected to leave Syria as soon as possible, Goodrow told The Associated Press in Vermont.

The Americans' release came as thousands of protesters shouting "We want freedom!" again took to the streets Friday, defying security agents who tried to beat them back with gunfire, tear gas and batons.

Activists dubbed Friday a "Day of Martyrs" and called for mass demonstrations to honor more than 70 people killed since the protests began in mid-March. The death toll Friday was unclear; one Syrian activist living in exile said he had been told by eyewitnesses that at least three people were killed.

Protests erupted around the country, including neighborhoods outside the capital, Damascus, and in the southern city of Daraa, which has become the epicenter for the protests.

Several eyewitnesses told The Associated Press by telephone that up to 5,000 people were marching in Daraa, shouting "We want freedom!" and "The blood of martyrs is not cheap!"

The account could not be independently confirmed because the media are under heavy restrictions in Syria. On Friday, two Associated Press journalists were ordered to leave the country with less than one hour's notice.

For the first time Friday, the government acknowledged there were pro-reform gatherings in cities including Daraa and Latakia, but said there was no friction between security forces and protesters.

President Bashar Assad dashed expectations he would announce sweeping changes this week and instead announced that he would form committees to look into civilian deaths and the possibility of replacing decades-old emergency laws.

He also blamed the popular fury that has gripped Syria on a foreign conspiracy — enraging protesters who had expected Assad to announce reforms.

Scores of plainclothes security agents deployed Friday in Damascus near the historic Umayyad mosque, where only last week, pro- and anti-government crowds clashed, hitting each other with leather belts.

As people began leaving the mosque Friday, a crowd of at least 300 people carrying Syrian flags and pictures of Assad broke out into clapping and chants of "Allah, Syria, Bashar!"

Security forces made no attempt to stop them.

A Syrian in Lebanon who was in touch with eyewitnesses in the northeastern city of Qamishli said thousands were protesting there in solidarity with Daraa, chanting "peaceful, peaceful."

In the central city of Homs, one witness said pro- and anti-Assad crowds were fighting with sticks.

Dozens of people were wounded and many others arrested, said the witness.

"With my own eyes I saw them arrest one person and put him in the trunk of a car," he said.

In the Mediterranean port city of Latakia, witnesses said security agents were asking people for their IDs before they entered mosques.