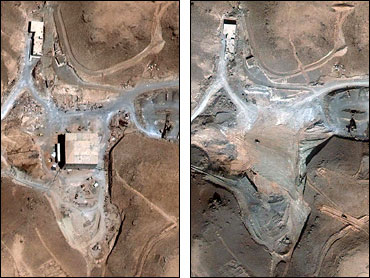 NEW YORK — In a major turnaround, Syria is pledging full cooperation with U.N. attempts to probe strong evidence that it secretly built a reactor that could have been used to make nuclear arms, according to a confidential document shared with The Associated Press.

If Syria fulfills its promise, the move would end three years of stonewalling by Damascus of the International Atomic Energy. Since 2008, the agency has tried in vain to follow up on strong evidence that a target bombed in 2007 by Israeli warplanes was a nearly built nuclear reactor that would have produced plutonium once active.

Syria's sudden readiness to cooperate seems to be an attempt at derailing U.S.-led attempts to have Damascus referred to the U.N. Security Council amid already strong international pressure on the Syrian leadership to end its crackdown on pro-democracy demonstrators.

An IAEA report last week said the Vienna-based agency "assesses that the building destroyed ... was a nuclear reactor" — the finding sought by Washington and its allies to push to have Syria reported to the council by a 35-nation IAEA board meeting next month.

That, in turn, apparently triggered Syria's decision to compromise.

In a confidential note sent Friday to board members, IAEA chief Yukiya Amano cites top Syrian nuclear agency officials as saying "we are ready to fully cooperate with the agency" on its probe of the suspect site. Amano said the pledge was contained in a letter dated Thursday — two days after his agency delivered its assessment.

But Washington is continuing its push. It has put forward a restricted draft of a resolution to be voted on at the 35-nation IAEA board meeting beginning June 6 that — if passed — would report Syria to the U.N. Security Council for violating the Nuclear Nonproliferation Treaty.

The draft, which also was made available to the AP on Sunday, notes "with serious concern" Syria's refusal to allow IAEA inspectors follow-up visits to the bombed site after the one they made in 2008. As a consequence, the board "decides to report ... Syria's noncompliance" with its NPT commitments," says the document.

Syria's maneuvering will complicate Western attempts to bring its nuclear secrecy to the attention of the Security Council. Still, Washington said it remained committed to trying.

"We are aware that the Syrian government has sent a letter to the IAEA regarding the agency's long-standing requests for full Syrian cooperation," says a letter dated Friday from the U.S. mission that was sent to board members with a copy of the draft resolution.

"Such cooperation would indeed be welcome but would not have any bearing on the finding of noncompliance" by Syria of its NPT obligations, says the letter, which urges "board action" on the draft.

The letter, also shared Sunday, was signed by Robert A. Wood, America's deputy chief delegate to the IAEA. It and the other confidential documents were provided to the AP by diplomats who requested anonymity because of the nature of the material.

Syria has denied hiding a nuclear program. But it has refused to allow IAEA inspectors to revisit the bombed site after an initial mission found traces of uranium and other materials that strengthened suspicion that the site was nuclear.

The Syrian pledge of cooperation will allow it to lobby uncommitted nations to vote against any IAEA resolution on U.N. Security Council involvement. Western nations fear that it is a tactic meant to allow Damascus to draw out the issue even further and destroy any remaining evidence of nuclear activity at the site.

If Syria is reported, the council has options ranging from doing nothing to passing its own resolutions demanding compliance with the IAEA, followed by sanctions to enforce such demands — as has been the scenario for Iran.

While Iran continues its nuclear activities, intelligence services have said Syria's covert program was effectively ended by the Israeli bombing of the Al-Kibar desert site. Also, forcing the issue would detract attention from Iran and possibly dilute efforts to end Syria's bloody crackdown on its grass-roots pro-democracy movement.

But diplomats say that beyond sending a signal to Syria that defying the IAEA carries a price tag, reporting it to the U.N. Security Council also would be a rehearsal for more action against Iran. They said that after more than four years of gridlock in IAEA attempts to investigate Iran's alleged nuclear weapons-related experiments, Amano, the IAEA chief, also is planning to draw up an assessment — perhaps by the end of the year — saying that such experiments were likely conducted.

That, in turn, would open the path for renewed IAEA referral of Iran to the Security Council and lead to potential tightening of existing sanctions or a new set of U.N. penalties, the diplomats said.

Along with Iran, Syria denies allegations that it is — or was — interested in developing nuclear arms. But its refusal to allow IAEA inspectors new access to the bombed desert site has heightened suspicions that it had something to hide, along with its decision to level the structure that was destroyed by Israel and later to build over it.

Drawing on the 2008 visit to Syria by its inspectors, the IAEA determined that the destroyed building's size and structure fit specifications that a reactor would have had. It also found graphite and natural uranium particles that could be linked to nuclear use of the structure.