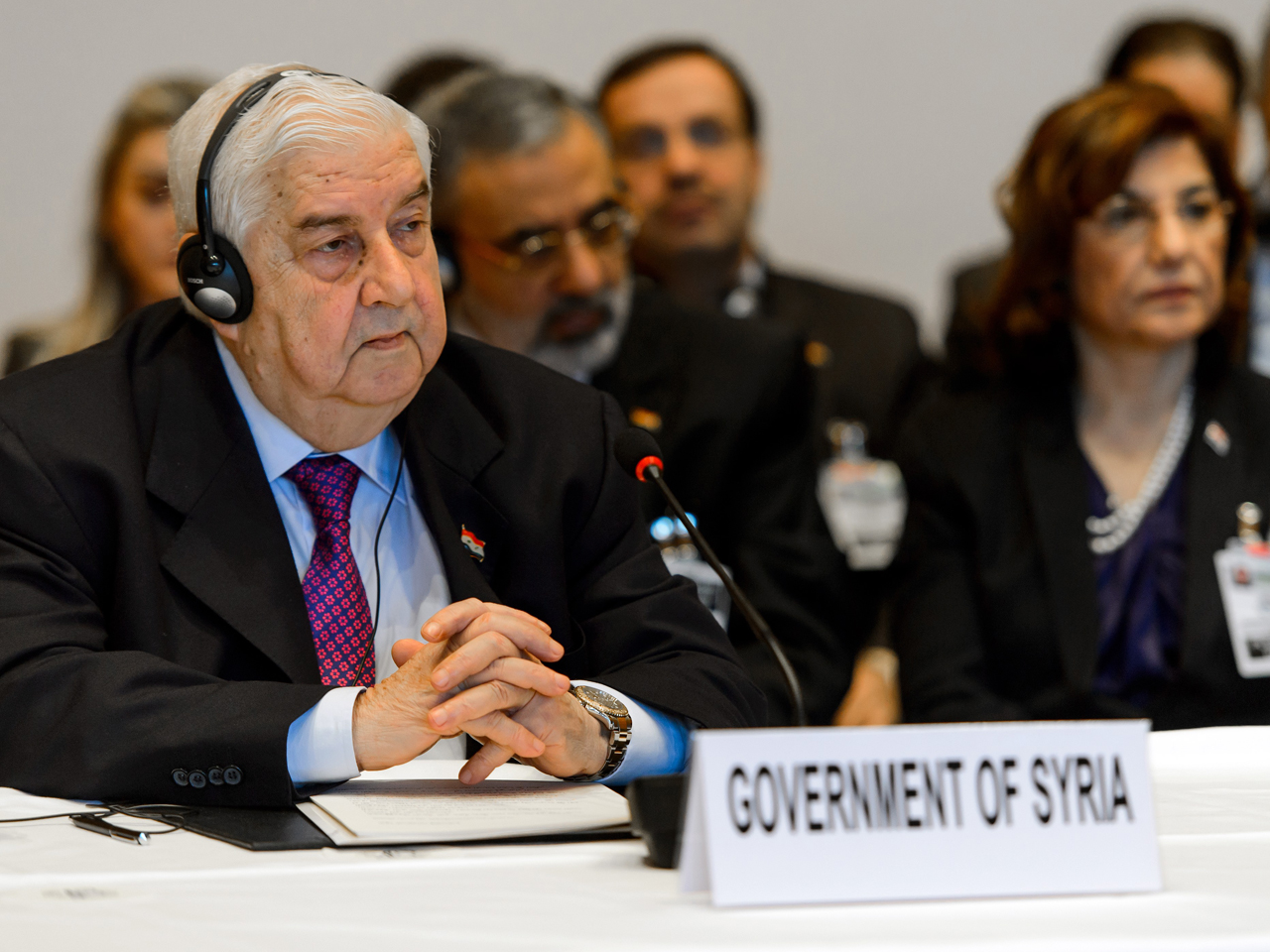 MONTREUX, Switzerland -- International peace talks to address Syria's almost three-year-old civil war opened in Montreux near Geneva on Wednesday with terse, defiant speeches from the regime of Bashar Assad and from the Western-backed opposition, making it clear that any political resolution to the crisis which has claimed more than 130,000 lives is going to be hard-won.

U.N. Secretary General Ban Ki-moon opened the first day of the talks on a note of reconciliation, but delegations from Assad's government and the Syrian exile opposition group adopted combative tones and seemed to stick to the entrenched positions they've held for years.

In his opening remarks, Secretary of State John Kerry called the conference a test of world's resolve and said it would set the stage for tough negotiations, but he reiterated the Obama administration's stance that any political solution must include Assad removing himself from power.

CBS News’ George Baghdadi reported from Montreux that Assad's government has never had a dialogue with the opposition, and the regime's opening remarks made it clear that Damascus is still on a war footing against an opposition movement it classifies entirely as "terrorists."

While the two sides came to Switzerland ostensibly to work toward the implementation of a peace framework laid out previously in Geneva by the U.S., Russia and the U.N., they still have huge differences of opinion in how that should be accomplished.

According to the communique agreed to in Geneva in 2012, the goal of this week’s conference is to agree a plan for a transitional government in Damascus, but as Baghdadi notes, the Assad regime has never endorsed the concept of a transitional administration in which it plays no central role.

The U.S. and the opposition Syrian National Coalition have repeatedly said that Assad must step down as part of any political solution to the crisis. Kerry said Wednesday there was "no way" Assad should play a role in his country's political future.

Syrian Foreign Minister Walid Muallem, leading the Syrian delegation, has rejected any discussion of Assad being forced to step down, and taking the floor Wednesday, he warned Secretary of State Kerry that no one "has the right to withdrawal legitimacy" from the Syrian government "apart from the Syrian people."

Muallem slammed the rebel forces as Islamic extremists and listed myriad atrocities that he attributed squarely to the opposition. He also took aim at Syria's neighbor Turkey and the U.S. for supporting "terrorism" in his country.

In a sign of the tension within the conference, Muallem exceeded the time allotted to him for his opening speech, but when challenged by Ban, he refused to stop short, telling the U.N. Secretary-General, "you live in New York, I live in Syria," and demanding time to finish his remarks.

When Muallem finally concluded his speech, Ban lamented that "the constructive mood which I set has been broken," and he pleaded with Ahmed Jarba of the SNC, who was to speak next, not to match Muallem's tone with accusations aimed at specific governments or extensive anecdotes of atrocities.

Jarba returned fire without hesitation, accusing the Assad regime of being the "terrorists" and asking the conference attendees "who do you trust?"

He called on the Assad regime to sign the Geneva Communique from 2012 to allow a political transition to begin. Jarba made it clear that the SNC was "not here to discuss anything regarding negotiations" until the Syrian government agreed to that framework. He said "this is the only topic for us," speaking minutes after Assad's foreign minister.

Baghdadi said security was extremely tight at the cluster of downtown Montreux hotels where representatives of almost 40 nations -- as well as delegates from the U.S.-backed opposition Syrian National Coalition (SNC) -- arrived for the first day of the U.N.-organized summit.

As CBS News correspondent Holly Williams reported Tuesday, a new report by former war crimes prosecutors shows photographic evidence that seems to show mass killing by the Assad regime. According to the report, some of the victims were beaten, some were strangled, and others were starved.

One of the report's authors described it as killing on an "industrial" scale.

CBS News cannot independently verify the images in the report, which was funded by the Qatari government -- a strong supporter of the Syrian opposition.

The reports authors, however, are experienced former war crimes prosecutors, including Sir Desmond De Silva, who said the evidence "has all the hallmarks of ordered... deliberate.. merciless execution, by a whole variety of unpleasant means."

Both the Syrian army and the rebels have been accused of atrocities during the country's civil war, but the scale of the torture and executions alleged in this report is unprecedented.

The Syrian leader himself, meanwhile, offered his strongest indication to date that he is considering running for re-election this year when his term expires, in a recent interview with French news agency AFP.

Assad and his government have enjoyed a surge of confidence in recent months following a string of military victories over the diverse rebel factions, which have themselves been plagued by division and infighting as Islamic fundamentalist groups wield increasing sway in some areas.