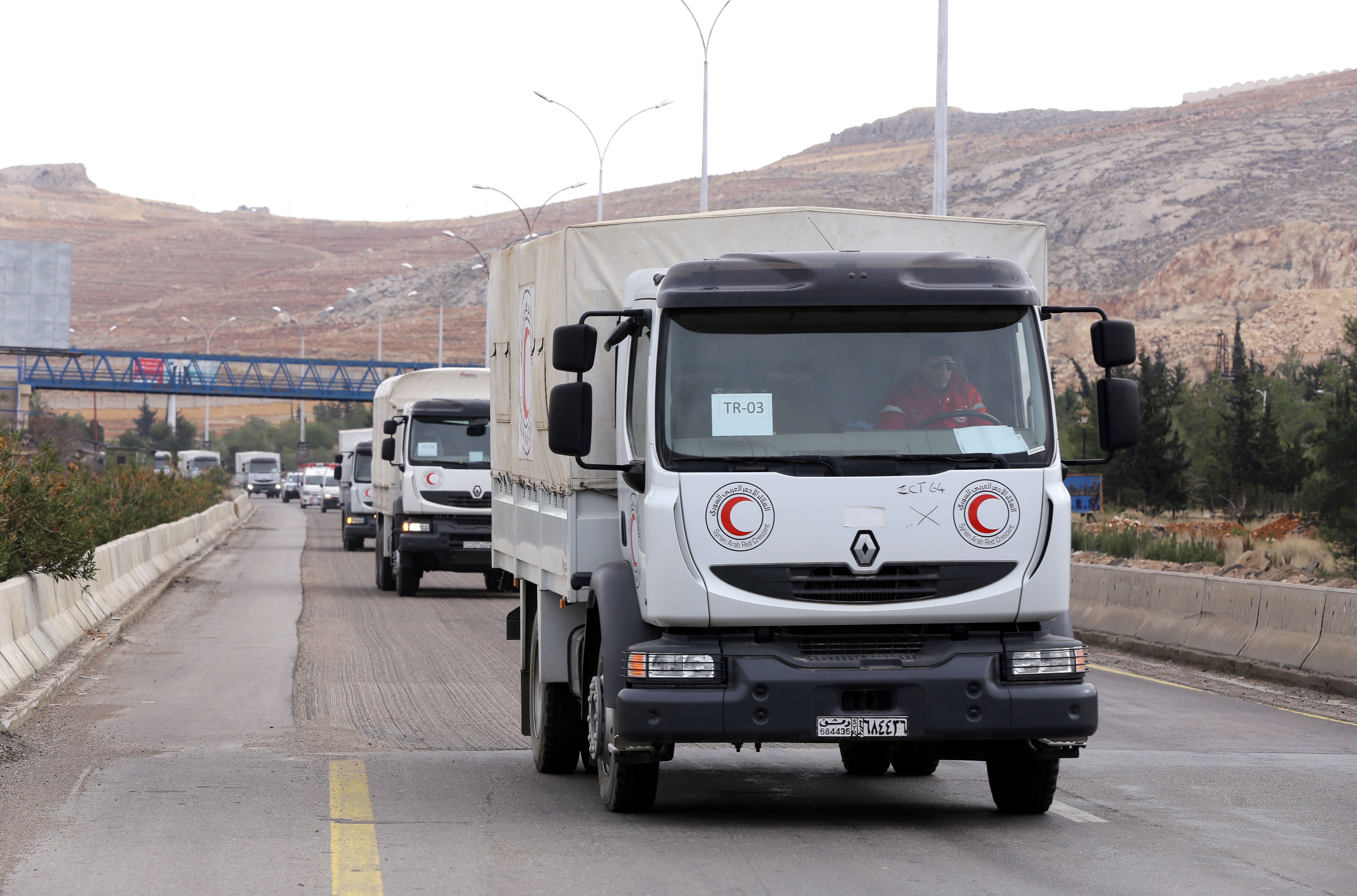 DAMASCUS, Syria -- Aid convoys delivered long-awaited food, medicine and other supplies to three besieged Syrian communities Monday, part of a U.N.-supported operation to help tens of thousands of civilians cut off for months by the fighting.

Reports of starvation and images of emaciated children have raised global concerns and underscored the urgency for new peace talks that the U.N. is hoping to host in Geneva on Jan. 25.

U.N. humanitarian chief Stephen O'Brien said about 400 people in the hospital in the besieged mountain village of Madaya must be evacuated immediately to receive life-saving medical attention. He told reporters after briefing the U.N. Security Council that they need treatment for medical complications, severe malnourishment and starvation.

This must be done as soon as possible "or they are in grave peril of losing their lives," O'Brien said, adding that efforts will be made to get ambulances to Madaya on Tuesday to evacuate the 400 people, of all ages, if safe passage can be assured.

The U.N. says 4.5 million Syrians are living in besieged or hard-to-reach areas and desperately need humanitarian aid, with civilians prevented from leaving and aid workers blocked from bringing in food, medicine, fuel and other supplies.

It will take several days to distribute the aid in Madaya, near Damascus, and the Shiite villages of Foua and Kfarya in northern Syria, and the supplies are probably enough to last for a month, aid agencies said.

"It's really heartbreaking to see the situation of the people," said Red Cross spokesman Pawel Krzysiek, who oversaw the distribution in Madaya. "A while ago, I was just approached by a little girl and her first question was, 'Did you bring food?'"

Added Sajjad Malik, a representative of the U.N. High Commissioner for Refugees who took part in the operation: "It's cold and raining, but there is excitement because we are here with some food and blankets."

The operation marked a small, positive development in a bitter conflict now in its fifth year that has killed a quarter of a million people, displaced millions of others and left the country in ruins.

"This has to be just a start," said New Zealand's U.N. Ambassador Gerard van Bohemen, who called for the Security Council meeting with Spain. "It can't be just a one-off situation. Humanitarian access cannot be held hostage to politics."

Rebels opposed to President Bashar Assad are in control of Madaya, a mountain town about 15 miles (24 kilometers) northwest of Damascus. Government troops and fighters from the Lebanese militant group Hezbollah have surrounded the town. Opposition activists and aid groups have reported several deaths from starvation in recent weeks.

Syria's U.N. Ambassador Bashar Ja'afari denied anyone was starving in Madaya and blamed Arab television especially "for fabricating these allegations and lies."

Speaking at U.N. Headquarters, he blamed "armed terrorist groups" for stealing humanitarian aid and reselling it at prohibitive prices.

"The Syrian government is not and will not exert any policy of starvation against its own people," Ja'afari said.

But O'Brien, the U.N. humanitarian chief, said all the evidence the U.N. has shows there has been very severe malnourishment, severe food shortages, and reports of people "who are either starving or indeed have starved and died."

An Associated Press crew saw the first three trucks cross into Madaya on Monday, although journalists were not allowed to accompany the aid workers. At the town's entrance, several civilians - including five children shivering against the cold - said they were waiting to be taken out.

"I want out. There is nothing in Madaya, no water, no electricity, no fuel and no food," said Safiya Ghosn, a teacher who stood at the entrance of the town hoping to be evacuated.

Simultaneously, trucks began entering Foua and Kfarya, which are both under siege by rebel groups hundreds of miles (kilometers) to the north.

Tales of hunger and hardship have emerged from those inside all three communities: Pro-government fighters recently evacuated from inside Foua and Kfarya have said some residents are eating grass to survive. Residents of Madaya similarly have reported living off soup made of leaves and salt water.

Madaya has attracted particular attention in recent days because of reports of deaths and images in social media of severely malnourished residents. The aid operation, which is being facilitated by the U.N., was agreed on last week.

Some Assad supporters have said the photos were faked, and others alleged the rebels were withholding food from residents.

The aid group Doctors Without Borders says 23 people have died of starvation at a health center it supports in Madaya since Dec. 1, including six infants and five adults over 60.

Krzysiek, the Red Cross spokesman, said in a statement that he saw a lot of people on the street, "some of them smiling to us and waving to us, but many just simply too weak."

Almost 42,000 people in the town are at risk from hunger, said Yacoub El Hillo, the U.N.'s Resident and Humanitarian Coordinator in Syria.

Hezbollah's Al-Manar TV channel showed a group of people, including women and children, waiting for the convoys at Madaya's main entrance. In interviews, they accused rebel fighters inside of hoarding humanitarian assistance that entered the town in October and selling the supplies to residents at exorbitant prices.

Ghosn, who spoke to journalists accompanied by government officials, also blamed rebels in Madaya, saying: "Their depots are full while we go hungry. We have to humiliate ourselves to go to them and beg for food."

O'Brien said trucks were being unloaded Monday night by flashlight and the light from iPhones.

"We continue to call on all parties to the conflict to facilitate sustained and unimpeded access to all people in besieged and hard-to-reach areas in Syria," Dujarric said.

The U.N.'s World Food Program has said it will ship one month's worth of food for more than 40,000 people in Madaya from Damascus and enough for 20,000 people to Foua and Kfarya from the city of Homs.

A group of eight major international aid groups, including CARE International, Oxfam, and Save the Children, welcomed the aid convoy but also warned that a one-time delivery won't save starving people.

"Only a complete end to the 6-month-old siege and guarantees for sustained aid deliveries alongside humanitarian services will alleviate the crisis in these areas," the statement said.

Peter Wilson, Britain's deputy U.N. ambassador, said in New York it was "good news that those convoys are getting through, although it's little and it's late."

In Homs, meanwhile, regional Gov. Talal Barazzi said a 26-car convoy of food and clothing entered the Waer neighborhood of Homs as part of an agreement reached last month between the Syrian government and militants in the area. The deal earlier saw the evacuation of 720 people from Waer, including 300 militants.

In reports of fighting Monday, the state-run SANA news agency reported that a rocket, presumably fired by rebels, hit a residential neighborhood in the northern city of Aleppo, killing three children and wounding two other people. It said the Syrian army had begun a major offensive in the countryside west of the city.