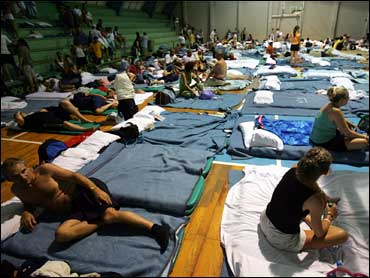 The incidents follow Syria's capture Saturday of five fisherman ? four Lebanese and a Syrian ? in Syrian territorial waters and an ongoing border dispute that has been delaying hundreds of trucks leaving Lebanon into neighboring Syria bound for other Arab countries.

Hariri's killing sparked massive anti-Syrian protests in Lebanon, where many accused Damascus ? the longtime powerbroker here ? of playing a role. Syria denied the claims but was forced under intense U.S. and U.N. pressure to withdraw its troops from Lebanon, which it did by April.

Arab League Secretary-General Amr Moussa, who met Syrian President Bashar Assad in Damascus on Sunday, urged Lebanon and Syria to continue to base their "very special" relationship on a "positive attitude by both sides." No details were available from the Moussa-Assad talks.

Sunday's shootout took place near the Lebanese village of Qaa, 60 miles northeast of Beirut, in an area where Lebanon's border with Syria is not clearly marked. Lebanon recently increased patrols along the area's mountain trails to curb smuggling.

The smugglers enter Lebanon from Syria and were returning with a load of unspecified contraband when they were spotted and fired on by a Lebanese customs patrol, a border policeman said on condition of anonymity citing security concerns.

One Lebanese officer was slightly wounded and the smugglers returned to Syria, the official said.

The Lebanese border policeman also claimed a Syrian border patrol member shot toward Lebanese customs officers. Syrian customs officials declined to comment on the report, saying they had not heard of the border shootout.

Security officials in northern Lebanon, also speaking on condition of anonymity because of security issues, said a Syrian sea patrol arrested four Lebanese fishermen Sunday after they entered Syrian waters at Aridah, north of the Lebanese city of Tripoli.

Separately, Syrian social affairs and labor minister, Deyalla al-Haj Aref, told the Syrian private-owned Al Iktisadieh weekly that her ministry has sent "detailed lists" of Syrian workers killed in Lebanon, including the date, time and manner in which they were killed.

Aref did not say how many died but said her government was seeking compensation from Lebanon for the relatives of the victims. Syria would discuss the issue further with Lebanon once its Cabinet is formed, she added.

The wave of anti-Syrian feeling following Hariri's slaying was also directed at Syrians seeking jobs in Lebanon. Syrian media reports have said 35 Syrians were killed in Lebanon following Hariri's death, but there has been no official Syrian or Lebanese confirmation of the number.

Lebanese transit truckers have been complaining for nearly three weeks of new, tough measures imposed by Syrian customs officials at Masnaa and on the Abboudieh-Dabbousieh crossing in the north. Syria contends the searches are required by security considerations. It has refused to speed up the processes.

Syria's military withdrawal from Lebanon coupled with the anti-Syrian outpouring following Hariri's death were damaging blows for Damascus, which has also been regularly accused by the United States of supporting Islamic militants fighting in Iraq and Israel. Syria denies such claims.