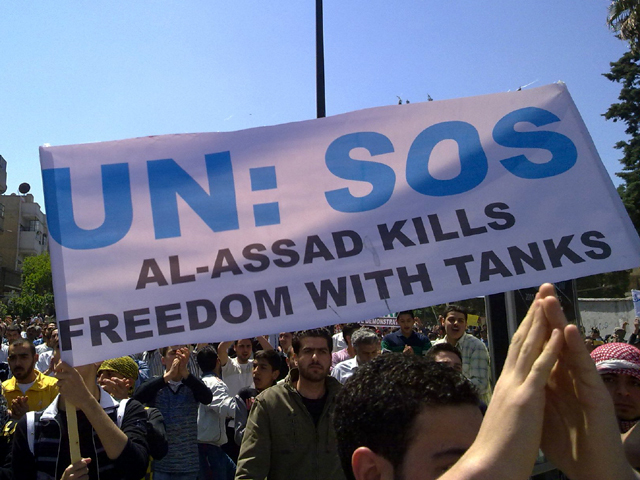 BRUSSELS - The European Union imposed an arms embargo Monday on Syria, where the government is conducting a violent and sometimes lethal crackdown on pro-democracy protesters.

The EU is banning the shipment to Syria of "arms and equipment that could be used for internal repression," an EU statement said late Monday.

The EU also is prohibiting 13 Syrian "officials and associates of the Syrian regime" from traveling anywhere in the 27-nation union, and is freezing their assets, the statement said. The 13 have been identified as being responsible for the violent repression against the civilian population, it said.

An EU official said late last week that Syrian President Bashar Assad would not be among those sanctioned. The official spoke on condition of anonymity in exchange for disclosing confidential information. The EU will publish the names of those sanctioned in its official journal Tuesday.

EU envoys recommended the visa ban and assets freeze Friday, but Monday's decision by all member governments was required for formal approval.

In an attempt to increase the pressure on Assad's regime, the United States has also imposed sanctions. Those penalties target three senior Syrian officials as well as Syria's intelligence agency and the Revolutionary Guard in Iran, a key Syrian ally.

Assad's regime appears determined to crush the uprising by force and intimidation. He has dispatched army troops and tanks to crush the seven-week uprising that has posed the most serious challenge to his family's 40-year rule. A death toll has topped 630 civilians since the unrest began, according to rights groups.

Monday's arrests, which zeroed in on the protests' organizers and participants, were focused in four areas — the central city of Homs, the coastal city of Banias, some suburbs of the capital Damascus and villages around the southern flashpoint city of Daraa, said Rami Abdul-Rahman, director of the Syrian Observatory for Human Rights.

He and other activists said the crackle of gunfire could be heard in the Damascus suburb of Maadamiyeh.

Activists said security forces redeployed in the town Monday after a brief withdrawal the day before, closing all roads leading in.

The area, scene of large demonstrations in past weeks, was without electricity, communication or water, the activists said on condition of anonymity for fear of reprisal. Residents also reported house-to-house raids and arrests and said several tanks were stationed in the town.

By early afternoon, scores of women were demonstrating in Banias, demanding the release of hundreds of detained men who were being held at the city's soccer stadium, Abdul-Rahman said. He added that security officers promised the women that all men over the age of 40 would be freed.

In an indication that the regime shows no sign of folding, Assad was quoted as saying in comments published Monday that "the current crisis in Syria will be overcome and that the process of administrative, political and media reforms are continuing." The report, in the private daily Al-Watan, which is close to the government, did not elaborate but said Assad made the comments while receiving a local delegation Sunday.

Abdul-Rahman said that more than 250 people had been arrested in Banias, home to one of Syria's two oil refineries. Special forces backed by tanks entered the city Saturday.

Among those arrested was a leading organizer of the demonstrations, along with his father and three brothers. Security forces also detained Firas Khaddam, nephew of former Vice President Abdul-Halim Khaddam, who has been living in exile since he left Syria in 2005 and called for the overthrow of the regime, Abdul-Rahman said.

Meanwhile, the Al Baath newspaper of Syria's ruling Baath party said "cautious calm" has been restored to Banias. It said the showdown in the city "will end within a few hours." The Al-Watan newspaper said Banias has been under the full control of the Syrian army after "fierce" battles with "armed terrorist" groups. It said the groups used heavy weapons and mortar rounds.

Syrian officials and state-run media have tried to portray Banias as a hotbed of Islamic extremists to justify the crackdown there. The state news agency SANA said the army and security forces were pursuing fugitives in Banias and were able to arrest a large number of them and confiscate their weapons.

There has been no independent confirmation that protesters have armed themselves or opened fire on security forces.

A resident who fled Banias two days ago told The Associated Press Monday that among those detained were mosque imams, the head of the municipality and members of leading families in the city such as Khaddam, al-Masri and Sahyouni. He spoke condition of anonymity for fear of government reprisals.

Monday's raids come a day after army backed by tanks moved into different areas in the country including the central city of Homs, Syria's largest, and three villages near Daraa.

The unrest gripping Syria was triggered by the arrests of teenagers caught scrawling anti-government graffiti on walls in Daraa, a southern city near the border with Jordan. Despite boasts by Assad that his nation was immune from the kind of uprisings sweeping the Arab world, protests against his rule quickly spread across the country of 23 million people.

Assad, who inherited power from his father in 2000, has blamed "armed thugs" and foreigners. The regime has hit back at protesters with large-scale military operations, including an 11-day siege in Daraa that killed about 50 residents.

Syria has also banned foreign media and restricted access for reporters to many parts of the country, making it difficult to independently confirm witness accounts of the violence.