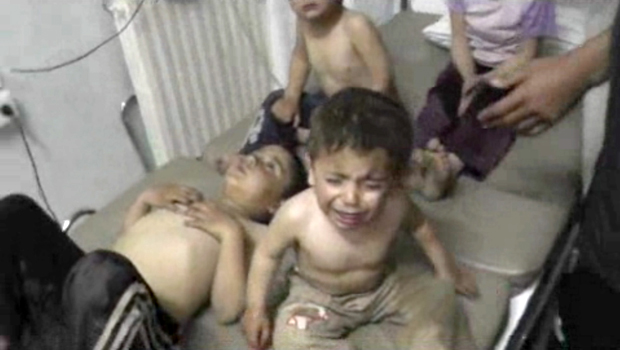 BEIRUT -- Syrian government media and rebel forces said Saturday that poison gas had been used in a central village, blaming each other for an attack that reportedly injured scores of people.

Details of the attack Friday in Kfar Zeita, a village in Hama province some 125 miles north of Damascus, remained sketchy Saturday night.

But online videos posted by rebel activists showed pale-faced men, women and children gasping for breath at a field hospital, suggesting an affliction by some kind of poison in a conflict that's seen hundreds killed by chemical weapons.

The main Western-backed opposition group, the Syrian National Coalition, said the poison gas attack hurt dozens of people, though it did not identify the gas used.

The Britain-based Syrian Observatory for Human Rights, an activist group that relies on a network of on-the-ground volunteers, said the gas attack happened during air raids that left heavy smoke over the area. It reported that people suffered from suffocation and breathing problems after the attack, but gave no further details.

State-run Syrian television blamed members of the al-Qaeda-linked Nusra Front rebel group for using what it described as chlorine gas in an attack it said killed two people and injuring more than 100. The TV report claimed the Nusra Front is preparing for another chemical attack against the Wadi Deif area in the northern province of Idlib, as well as another area in Hama. The government station did not explain how it knew the Nusra Front's plans.

Activists in the village could not be reached Saturday.

An activist from Hama who is currently in Turkey and is in contact with residents told The Associated Press that the attack occurred around sunset Friday. The man, who goes with the name Amir al-Basha, said the air raids on the rebel-held village came as nearby areas including Morek and Khan Sheikhoun have witnessed intense clashes between troops and opposition fighters.

An amateur video posted online by opposition activists showed a hospital room in Kfar Zeita that was packed with men and children, some of whom breathing through oxygen masks. On one bed, the video showed six children, some appearing to have difficulty breathing while others cried.

The video appeared genuine and corresponded to other AP reporting of the attack.

Chemical weapons have been used before in Syria's 3-year-old conflict, a war which activists say has killed more than 150,000 people. In August, a chemical attack near the capital, Damascus, killed hundreds of people. The U.S. and its allies blamed the Syrian government for that attack, which nearly sparked Western airstrikes against President Bashar Assad's forces. Damascus denied the charges and blamed rebels of staging the incident.

Before the August attack, there have been several incidents of toxic gases being used. Britain, France and the U.S. have spoken about chemical weapons use in the central city of Homs, Damascus and elsewhere.

A United Nations weapons inspectors' report released in December identified four locations where chemical weapons likely had been used in 2013: Khan al Assal outside Aleppo, Jobar in Damascus' eastern suburbs, Saraqueb near Idlib in the northwest and Ashrafiah Sahnaya in the Damascus countryside. In two cases, inspectors reportedly found "signatures of sarin," a nerve agent.

The Syrian National Coalition called on the U.N. to conduct a "quick investigation into the developments related to the use of poisonous gas against civilians in Syria." The coalition also claimed that another chemical weapons attack Friday struck the Damascus suburb of Harasta, though state media did not report on it.

The chemical weapons attack in August caused an international outcry. A coalition formed to eliminate the weapons and now aims to remove and destroy 1,300 metric tons of chemicals held by the Assad government by June 30. Syria's government missed a Dec. 31 deadline to remove the most dangerous chemicals in its stockpile and a Feb. 5 deadline to give up its entire stockpile of chemical weapons. Assad's government cited security concerns and the lack of some equipment but has repeated that it remains fully committed to the process.

Meanwhile, violence continued Saturday elsewhere in Syria. In the northern city of Aleppo, Syria's largest and one-time commercial center, the Observatory and state television reported intense clashes, mostly near a main intelligence office in the city's contested neighborhood of Zahra.

Aleppo became a key front in the country's civil war after rebels launched an offensive there in July 2012.