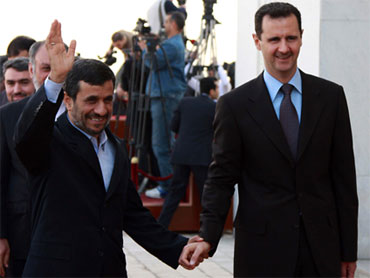 (AP Photo/Bassem Tellawi)
This story was filed by CBS News' George Baghdadi in Damascus.Syrian President Bashar Al-Assad on Thursday said his country would be always ready at "every moment" to confront any Israeli assault as Damascus seems to ignore U.S. calls to end its relationship with Iran.

"We assume that we are basically in front of an entity that may undertake an aggression at any time as long as its history is founded on aggression. Regardless of latest Israeli statements, we are always preparing ourselves for any Israeli aggression, whether large or small," Assad told a press conference with his Iranian counterpart Mahmoud Ahmadinejad.

"Our answer to these Israeli statements is obvious: we have to be ready at any time, in every moment, to confront any Israeli aggression that may be launched for any reason and under any justification," Assad added in reply to a question.

"The outcome of the past period was in favor of the resisting powers in the region," he said, adding that reinforcing ties among regional countries was the "only way" for an independent decision.

His words seemed a quick and an indirect reply to U.S. desires, only one day after Secretary of State Hillary Clinton told U.S. lawmakers that the Obama administration is urging Syria to move away from its "deeply troubling" relationship with Tehran.

Instead, Syria decided to strengthen its ties to Iran. Prior to the press conference, foreign ministers of Syria and Iran, Walid al-Muallim and Manouchehr Mottaki, signed an agreement to abolish visa requirements between the countries.

"I am really surprised how they talk about stability in the Middle East, peace and other beautiful principles and they call two countries, any two countries and not necessarily Syria and Iran, to keep distance," Assad continued.

"We need to further reinforce relations if the true objective is stability. We do not want others to give us lessons on our region, our history. We can determine how things should go and we know our interests… (but) we thank them for their advices." the Syrian leader told reporters.

Iran's president said the superpowers can no longer dictate and order other countries from oversees.

"(The Americans) want to dominate the region but they feel Iran and Syria are preventing that," Ahmadinejad said. "We tell them that instead of interfering in the region's affairs, to pack their things and leave."

"Syria and Iran will stay together. We will remain so until the end and there will be no distance between us," he commented, calling on the "Zionist entity not to repeat the mistakes of the past one more time as that would mean its doomed end."

Syria's foreign minister Walid Mouallem publicly blamed Israel last week for "spreading an atmosphere of war," and warned that Damascus would not hesitate to strike deep into Israeli territory if provoked. He said plainly that a conflict would be "all-out," regardless of whether "it hits southern Lebanon or Syria."

His remarks were a response to Israeli Defense Minister Ehud Barak's own comments a few days earlier that the absence of a peace agreement with Syria could trigger a new Middle East war.

Nasrallah recently stated that Israel cannot afford an unwinnable war and blithely threatened an eye for an eye with the Jewish state.

Muallem, in the same press conference he gave with his Austrian counterpart, said his country was determined to help Iran and the West engage in a "constructive" dialogue over Tehran's contested nuclear program.

Western governments suspect that the nuclear program in Iran — which earlier this month started higher grade uranium enrichment — is cover for a drive to produce a bomb.

Iran, which has already been slapped with three sets of U.N. sanctions over its uranium enrichment, denies it has any such ambition and insists the atomic program is solely for peaceful purposes.

Damascus has been Tehran's major regional ally for the past three decades. Assad visited Tehran last August, and Ahmadinejad paid a visit to Syria last May.

Syria also plays a key role for any brokering of peace between Israel and the Palestinians and controls a long border with Iraq that used to be the main point of entry for foreign Iraqi insurgents.

Under President Obama, the United States started talking to Syria's government, in contrast to a policy of isolation under former President George W. Bush. The U.S. road to dealing with Iran's policy on Iraq, its nuclear program and much else may now be passing through Damascus.

Syria, in turn, argues that Washington should make every effort to force Israel to accept the Arab peace initiative. Damascus wants to regain the strategic Golan Heights, an enclave Israel captured during the 1967 Mideast War. It has offered peace in exchange.

Such steps will formally reopen diplomatic relations between the two countries, which had been suspended in 2005. Last week, eight years after being lumped into the axis of evil and five years since the assassination of Rafik Hariri, the U.S. State Department lifted an advisory that warned travelers about visiting Syria in hopes of warming relations.

After the press conference, both leaders went hand-in-hand to celebrate the birthday of the prophet Mohammed in a mosque in Damascus.