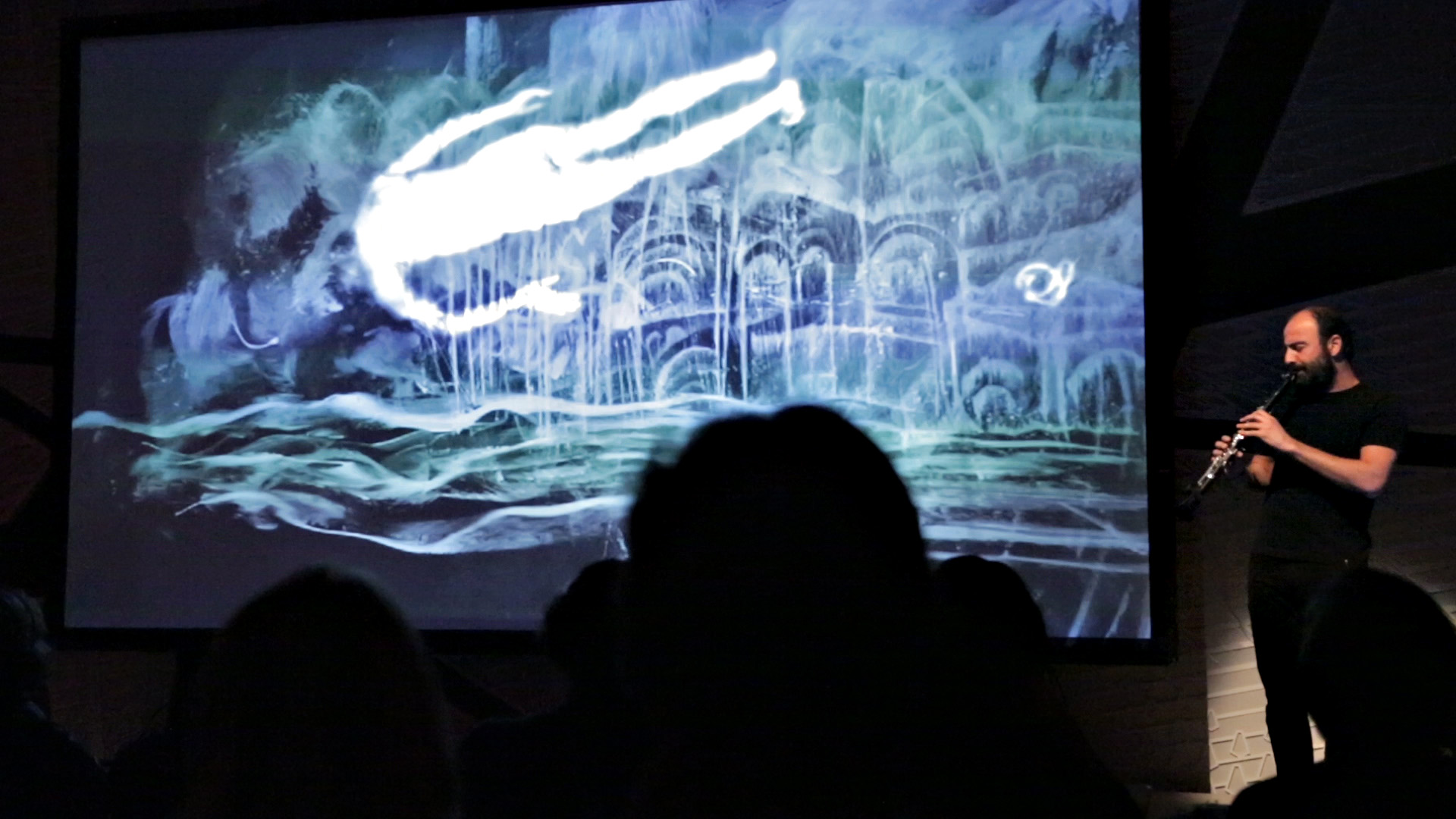 NEW YORK -- Playing his clarinet, Kinan Azmeh stands in front of a large projection screen as figures of white slowly surround him. As soon as the screen overflows with haunting, human silhouettes, the animated image quickly starts to burn until it's gone.

The scenes are the work of Kevork Mourad, who works off a nearby drawing table to create artwork in real time, which is then projected onto the screen. Computer animations, which he creates on a laptop, are woven in to create a dynamic visual presentation.

The blunt fragility of his opening image mirrors that of his inspiration - the plight of Syrians who have suffered through five years of war.

"I drew and I said people are dying now, houses are getting destroyed, I am going to burn my own drawing. So I burned it and I filmed that. It was kind of the smallest thing I can compare how every second things are disappearing, people are being perished," said Mourad.

The Syrian artists, based in New York, have created a 60-minute audio/visual performance documenting how they have felt during different stages of the war in Syria.

The duo calls the performance "Home Within."

"For me 'home' is the place that you want to contribute to without having to justify it ... and for us doing this is in a way a connection of home, like you can carry home with you. But also it means 'home within' like we are trying to dig into what actually, collectively home meant for lots of people [in Syria]," said Azmeh.

The composer and clarinetist was born in Damascus, but has lived in New York for the last 15 years. He has performed in various musical-visual acts around the world, but this one is incredibly personal. Azmeh said he couldn't stand by and watch his country in turmoil without contributing through the only way that he knew how - art.

Azmeh teamed up with his friend and visual artist, Mourad, who he has worked with before. They started performing "Home Within," after the first year of the Syrian war in 2011. They have since performed around the world in Montreal, Jordan, Lebanon, France, Germany and in the United States.

"What art can do ... is to bring some beauty to an incredibly tragic situation -- beauty not in the shallow sense, but we we want people to be moved because we are moved by it already," said Azmeh.

For Mourad, feeling that live emotion during the performance is what really separates this project from anything else people might see pertaining to the Syrian crisis.

"When we are creating in front of the audience, they are part of it, they are with us step-by-step," said Mourad. "When you are watching the T.V. you are far away. ... Here, it's so raw. We're all vulnerable."

Mourad is Syrian-Armenian born in the northeastern Syrian city of Al Qamishli. He has lived in the U.S. since 1998 and has mastered the art of illustrating sound. During the performance, Mourad creates around eight to 10 drawings on both black and white paper. He mesmerizes the audience with his quick lines and smearing technique that he does with his fingers. The live drawing, which is sometimes improvised, is mixed in with pre-recorded animation he has also created.

"This piece particularly, it's successful because ... his [Azmeh's] sound is so close to me and I think my lines, it kind of transforms to his sound," said Mourad.

As Mourad begins each new drawing, the audience can't help but guess what the end result will be. Examples range from a dancing figure who comes to life to people reaching for light beaming from a window; others include buildings, surrounded by smoke, being destroyed.

The evolving performances also change as events related to the Syrian crisis change. A few months ago, one of Mourad's drawings depicted people pulling carts loaded with their few belongings, symbolizing the migration to neighboring countries. Now he draws people being pulled ashore on a boat, depicting the waves of refugees making the risky journey to Europe across the Mediterranean Sea.

Mourad and Azmeh have also performed to raise money for aid organizations like Save the Children and Doctors Without Borders.

"I certainly know that the clarinet cannot stop a bullet, it cannot feed the hungry ... it cannot bring the refugees back home, but what it can do it can inspire," said Azmeh.

In one of the last images of the performance, Azmeh stands tall with his clarinet pointed only inches away from the screen. When he starts to play, a city slowly comes out of his clarinet as if it is being rebuilt. Azmeh said he sometimes gets emotional playing this piece because of the hope it represents for those back home.

"You almost believe ... if I play loud sound[s], maybe somebody at home can hear it," said Azmeh.