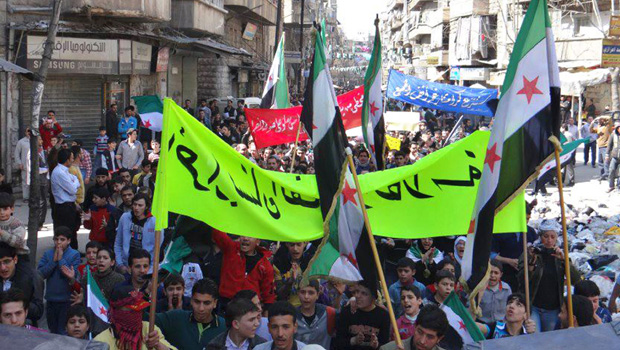 BEIRUT Heavy shelling in a neighborhood in the northern city of Aleppo sent civilians fleeing for their lives on Sunday, and the state news agency accused rebels trying to topple the government of setting fire to three oil wells.

Syria's civil war has battered the country's infrastructure and torn its social fabric. After more than two years of conflict, neither President Bashar Assad's regime nor the rebels fighting for his ouster appear close to victory.

The Britain-based Syrian Observatory for Human Rights said civilians were vacating the Sheikh Maqsoud neighborhood of Aleppo under heavy shelling by government forces. Rebels took over parts of the neighborhood late last week and were still clashing with Assad's troops who are trying to push them out. The Observatory, which relies on a network of contacts inside Syria, said four people, including two children, were killed in the shelling.

In the east, the state news agency, SANA, said rebels had set fire to three oil wells in the province of Deir al-Zour, causing a daily loss of 4,670 barrels of oil and 52 cubic meters of natural gas. It accused "terrorists," the government's term for rebels, of setting the fires after fighting among themselves about how to divide the oil.

Rebels battling Assad have seized large areas of territory in Syria's oil-rich east, including a number of oil fields. Although they lack the ability to exploit them, their loss represents a setback to the cash-strapped government they are trying to overthrow.

SANA said rebels have burned a total of nine wells in recent months. The three set ablaze on Sunday are the only ones still burning.

Also on Sunday, the government and the opposition blamed each other for killing a group of people found dead near the Lebanese border.

The Observatory said the bodies of 11 people, including eight women, were found near the town of Talkalakh in Homs province. The group said they were killed when government forces stormed the area. But SANA blamed rebels for the "massacre," saying they stormed the area, killed 10 people and looted homes and shops.

In another development, the head of the Syrian opposition's umbrella body said the group's military chief planned to visit Arab countries to solicit military aid. The trip follows a declaration last week by the Arab League that its member nations have a "right" to aid the Syrian opposition. Mouaz al-Khatib, the head of the Syrian National Coalition, told the Qatari daily Al Sharq of Gen. Salim Idris's travel plans, but did not say which countries he would visit.

Syria's conflict began in March 2011 with protests calling for Assad's ouster. It has since become a civil war, with hundreds of independent rebel groups across Syria fighting Assad's forces. The government says the war is an international conspiracy to weaken Syrian being carried out by terrorists on the ground. The U.N. says more than 70,000 people have been killed.