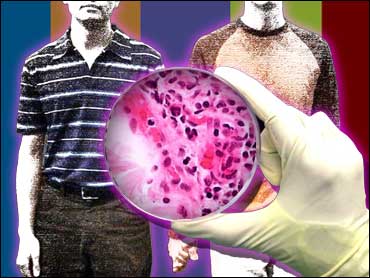 The nation's syphilis rate has climbed for the second year in a row, mostly because of an increase in cases among gay and bisexual men, the government said Thursday.

The actual increase in cases was small — 759 more people, for a total of 6,862 new cases — but the rise among gay and bisexual men has caused concern that the public health safeguards and safe-sex practices adopted over the last two decades during the AIDS epidemic continue to crumble.

"The vast majority of the United States is not seeing any syphilis at all," said Dr. John Douglas, director of the CDC's division of sexually transmitted diseases. "We're seeing syphilis rise primarily in groups of gay and bisexual men."

But the CDC also reported that prevention efforts appeared to be working in the South, which for the first time since 1984, no longer accounts for half of the country's syphilis cases. Also, women and non-Hispanic blacks saw a decline for the 12th consecutive year.

In the past two years, the government has repeatedly warned that gays and bisexuals may be letting down their guard against sexually transmitted diseases. About 40 percent of the new cases are from these groups, the CDC said.