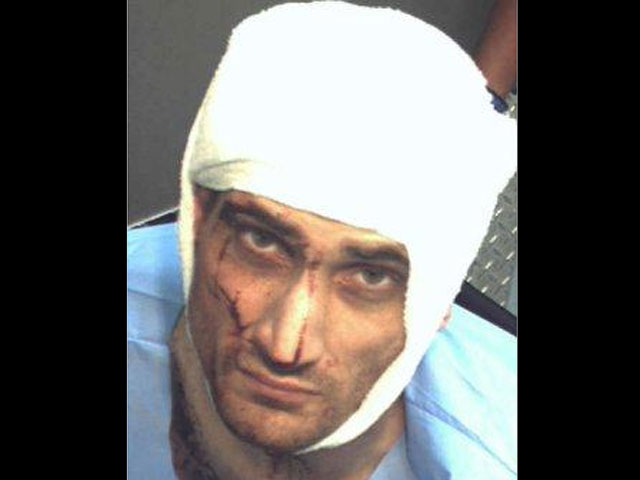 (CBS/WKMG) ORLANDO - Florida man Jason Gay was arrested Monday on suspicion of attacking an Orlando tattoo artist and a customer with a sword and guitar before being struck over the head with a glass table top.

According to Orlando police, Gay entered Ace's Tattoo Shop and the tattoo artist told him to look through some books while he finished with a customer, CBS affiliate WKMG reports.

While the artist was giving the customer a tattoo, Gay came around a corner holding a long sword in one hand and a guitar in the other and struck the artist in his shoulder with the sword and hit him in the back of his head with the guitar, according to an arrest affidavit.

As the fight continued, the customer picked up a glass table top and hit Gay over the head, cutting him badly, the arrest affidavit stated.

Gay then ran from the store and was later located by Orlando police. He was taken to a hospital and told police that the tattoo artist and customer were playing "word games" with him, the affidavit said. When asked to clarify, Gay said they were "sex games" and claimed that the pair called him a chain-gang punk, the affidavit said.

Gay was arrested and booked into jail.

The tattoo artist and customer were not seriously injured.