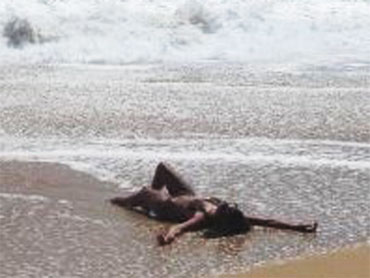 Under Swiss law, assisted suicide is legal, as long as nobody profits from a death.

But one Swiss organization is pushing this law to the limits, attracting an increasing number of foreigners who want to take their own lives, and raising serious ethical questions about an act most countries forbid.

60 Minutes II took an extraordinary look at the process of assisted suicide in February, and told the story of an 81-year-old German man named Ernst Aschmoneit, who is dying of Parkinson's disease. Correspondent Lara Logan reports.

Ernst Aschmoneit is flying from his home in Germany to Zurich, where he plans to be dead by nightfall.

"It's not very easy to say and to know this is my last day," says Aschmoneit. A retired mechanical engineer and childless widower, he travels alone to Switzerland.

He's afraid if he waits any longer, he'll be incapacitated by the disease and trapped in Germany, where assisted suicide is against the law.

A few months ago, Aschmoneit decided to take his own life as his symptoms got worse. The only way to feel better, he says, was "to say good-bye before it was too late."

Looking back, he says he has had a good life. What's ahead after this life? "Nothing," he says.

At the end of the last journey Aschmoneit will ever make is Ludwig Minelli, a human rights lawyer who founded Dignitas as an alternative to other assisted suicide groups in Switzerland.

It has more than 2,000 members and is the only group that welcomes foreigners.

From the airport, Minelli takes Aschmoneit to his home to discuss his suicide. Like those before him, all Aschmoneit had to do is convince Minelli he is of sound mind and has a consistent wish to die. Then, Aschmoneit goes to a Dignitas doctor who had already reviewed his medical records and prescribes him a barbiturate strong enough to kill him.

Armed with the lethal drug, Aschmoneit makes his final stop at a rented apartment in Zurich, where Dignitas takes its members to commit suicide.

There's nothing in the Swiss law that prevents Aschmoneit, or virtually anyone else, from doing that. Switzerland has by far the most liberal law in Europe, even more so than Holland and Belgium, two countries that do allow euthanasia.

While assisted suicide is legal in Switzerland, euthanasia is not. The difference is that with euthanasia, the doctor takes your life by administering a lethal drug. With assisted suicide, you have to be able to physically carry out that final act on your own.

"You can help a patient to make a suicide, but you are not allowed even in the worst cases to kill him," says Dr. Helmut Eichenburger, a retired urologist who volunteers for Dignitas.

Eichenburger says patients too ill to drink could use a self-induced injection, or a tube through the stomach. The preferred prescription, however, is an overdose of pentobarbitol, a sleeping potion Aschmoneit will use.

Like many Swiss people, psychiatrist Thomas Schlaepfer, a specialist in depression, is not opposed to assisted suicide - but he's disturbed by the way Dignitas operates.

"If somebody flies into Zurich Airport, is brought into an interview for an hour and prescribed medication, that's totally wrong," he says. "That's ethically wrong. Legally, it might be OK in Swiss law, but ethically it's wrong."

Schlaepfer says it is "totally impossible" to find out in a brief visit or two whether someone is of sound mind.

Minelli, however, claims to have no doubts about what he is doing: "Ah, it is not knowing," he says. "It is feeling, and that is much better than knowing."

As to doubts, he says, "I have no bad dreams. I do not wake up with bad ideas about what I'm doing."

Does that give him a sense of power? "It has nothing to do with power. It's just humanity. Help people with pains."

However, the most serious question facing Dignitas concerns mentally ill people like Walter Wittwer, a schizophrenic. For 10 years, Wittwer was a member of another assisted suicide group that wouldn't allow him to take his life, because he was mentally ill. Then, Wittwer joined Dignitas and three months later, he was dead.

But Schlaepfer says suicidal tendencies are often a symptom of mental illness and can be treated.

"In this office," he says, "many people said, 'I'm totally depressed; I want to end my life' and weeks later this opinion was changed."

"These days, everyone - even you or me, we - can make assisted suicides," says Brunner, noting that nothing - not even a medical degree - is required to start an organization that helps people kill themselves.

He also fears the law gives Minelli too much power: "He's got other people with him but he has the control. He decides."

But the law is on Minelli's side. He proceeds with the suicide of Aschmoneit, who gives 60 Minutes II his final interview as he prepares to end his life.

Aschmoneit says he feels peaceful but admits to having "small, little doubts."

"If you give me a possibility to get healthy, then I would say, 'OK, I take the next airplane and drive back,'" he says. Instead, he spends his last hours in a tiny, two-room apartment, where Dignitas volunteers mix the lethal drug with water.

"It's just very strange to think that in an hour you'll be dead," Logan tells Aschmoneit.

Minelli told 60 Minutes II that he's absolutely sure of the life-and-death decisions he makes. But incredibly, in the one case we followed out of all of the assisted suicides he's approved, Minelli later admitted he had doubts.

"I had the impression that he has come too early, but you can only see a human being from the outside," says Minelli. "You can't see what is going on in his mind."

Eichenburger, who sometimes prescribes the overdose for Dignitas members, says emotions matter as much as illness.

"A lot of people feel lonely, lonesome at that stage and they say, 'Well, I have nothing more. I have no relatives, I have no friends, no life ... Why am I still living anymore,'" says Eichenburger. "That's when I say that the dying has begun."

Less than an hour after 60 Minutes II left the room, Aschmoneit drank the overdose of pentobarbital. Twenty-four minutes later, he was dead.

His suicide was reported to the police, as required by law. And Ernst Aschmoneit became the 145th person to take his life through Dignitas.