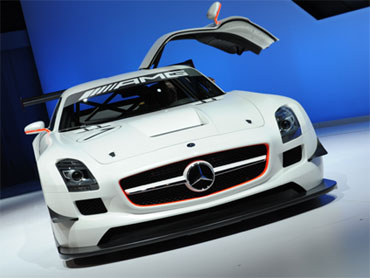 An unidentified speed-demon is going to pay the price for his 180 mile-per-hour cruise through Switzerland; he was arrested after a police chase and may now face a $835,000 fine. That's not a typo.

Swiss police have also impounded his $220,000 Mercedes SLS AMG (like the one at left, but in black) and relieved him of his driver's license.

Switzerland has highway laws that determine speeding fines based on two factors: the driver's speed, and their income.

Police have not identified the man, apart from saying he is a Swedish national, nor revealed his stated income, but they did give him credit where credit is due:

"We have no record of anyone being caught traveling faster in the country," a police spokesperson said, according to a report in The Daily Mail.

The driver was already on the Swiss police's radar. They told The Mail that his car was often seen on speeding cameras blasting through the same section of highway at speeds most police cars would struggle to maintain.

He wasn't arrested previously, the cops say, because their radar speed detectors simply couldn't register speeds over about 125 mph. They got some new equipment, and the Swede got busted.

When he eventually stopped on the side of the road and faced police, he reportedly told the officer his speedometer was broken. The police were to carryout a technical evaluation on the Mercedes to verify that claim.

Under the country's laws, the maximum penalty for speeding is 3,600 Swiss francs per day for 300 days, bringing the total to about $835,000. It's expected he'll face the full fine.

It's not yet clear when he'll get his 6-liter supercar back, or his driver's license.