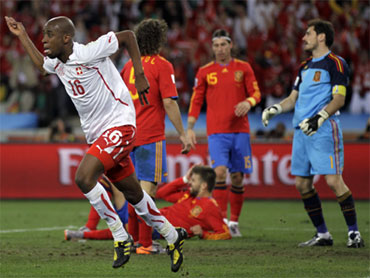 Spain's potent attack couldn't score a goal at the World Cup on Wednesday, leaving the European champions with a 1-0 loss to Switzerland that ended a 12-match winning streak.

Gelson Fernandes gave Switzerland the Group H win after running through the Spanish defense and shooting in a loose ball after a scramble in front of the net that left goalkeeper Iker Casillas chasing from behind.

"To be fair, I'm not used to scoring goals, so I was a bit surprised," Gelson Fernandes said. "It was a bit of luck."

It was only Spain's second loss in 50 games.

"Today wasn't our day," Spain coach Vicente del Bosque said. "We have two games ahead of us. We have to find a way to win them."

Also in Wednesday's action, Diego Forlan scored two goals to help give Uruguay a 3-0 victory over South Africa, pushing the host team closer to becoming the first to go out in the first round.

South Africa Falls to a Tragedy of Errors

Forlan first scored from a deflected 25-meter (yard) shot in the 24th minute and converted a penalty in the 80th to give Uruguay its first World Cup victory since a group game at the 1990 competition.

Uruguay now has four points from two games in Group A, while South Africa has one and needs to beat France on Tuesday to stay in the competition.

Earlier, Chile earned its first World Cup win in 48 years by beating Honduras 1-0 in Group H, while stewards and community activists in Durban protested against the tournament.

Spain dominated possession and created attack after attack in Durban, but the stifling Swiss defense manage to withstand it all and record Switzerland's first win over the Spaniards.

The closest Spain came to scoring was in the 72nd minute when Xabi Alonso's hit the cross bar.

Jean Beausejour tapped in the lone goal in Nelspruit in the 34th minute to give Chile a World Cup win for the first time since June 16, 1962, when it hosted the tournament and beat Yugoslavia 1-0 for third place.

"We're very happy, and we have to enjoy this triumph," Chile forward Alexis Sanchez said. "But we have to move ahead and win the game against our next rival."

Chile had several chances to double its lead, including in the 64th when defender Waldo Ponce's close-range header was saved by Honduras goalkeeper Noel Valladares.

Honduras, however, found it difficult to break through the well-organized Chilean defense.

"It's a fair result," Honduras defender Sergio Mendoza said. "We didn't have a clear chance at goal. We knew we could lose this match, but qualifying out of the group is not impossible."

Before the Spain-Switzerland match in Durban, stewards joined community activists in a peaceful protest of about 800 people outside City Hall to protest the World Cup, which they say has directed public funds away from providing housing and jobs.

Protesters held placards that said "Apartheid Still Exists" and "World Cup for All! People Before Profit."

Stewards at five of the 10 World Cup venues have been replaced by police because of a wage dispute, and FIFA and the local organizers went on the defensive about security issues.

"We have nothing further to say about the security issue, please call the police," local World Cup organizing committee spokesman Rich Mkhondo said. "They are able to answer all security-related matters. All. Not me."

Besides Durban, police have also taken over at both venues in Johannesburg and in Cape Town and Port Elizabeth.

Also, two Dutch women were released on bail after facing charges that they broke a law covering ambush marketing by wearing minidresses promoting a brewery at a World Cup match.

The women are being prosecuted under the Contravention of Merchandise Marks Act, which prevents companies benefiting from an event without paying for advertising.

South African police also raided the premises of a known group of Argentine hooligans and said they will detain 17 of them.

Police said they have been monitoring the "barras bravas" group and observed some of them trying to get into two World Cup matches without tickets.

"They have also behaved in a disorderly fashion on a number of occasions, roughing other fans up and generally causing trouble," police said.