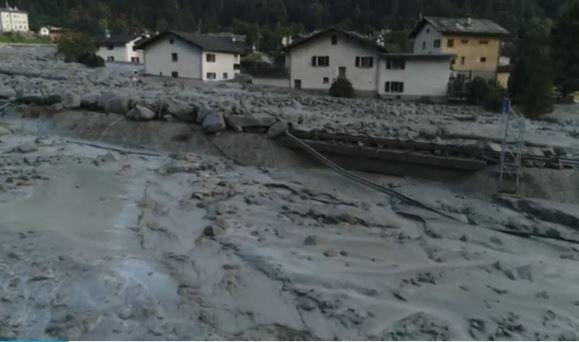 GENEVA -- Rescue workers used a helicopter and dogs to search for at least eight people still unaccounted for in a Swiss Alpine valley on Thursday, a day after a mudslide and rockslide hit a small village near the Italian border.

The village of Bondo, about 130 kilometers (80 miles) north of Milan, has been evacuated. The slide Wednesday morning sent about 4 million cubic meters (140 million cubic feet) of material crashing down, causing an impact equivalent to 3.0 on the Richter scale, senior police official Andrea Mittner said.

Police in Graubuenden canton (state) said buildings were damaged, and images from the scene showed a trail of destruction left by a river of mud and stone. They initially said that there were no injuries.

But police said Thursday that they haven't been able to reach eight people who may have been in the Bondasca valley at the time of the slide — nationals of Germany, Austria and Switzerland. Six of those people, all adults, have been reported missing by relatives.

Mittner said a Swiss army helicopter searched the valley during the night, but found nothing.

On Thursday, workers began searching with dogs but didn't immediately find anyone. A helicopter equipped with a device that can locate cellphones also was being sent up. Around 120 people were involved in the operation - police, firefighters, troops and others.

Mittner described the missing people as "Alpinists and walkers."

"These people may have been in the disaster area at the time of the event," he told reporters in the nearby town of Stampa. "We hope this was not the case, but it is possible that they had an accident."

"We don't know where exactly they are missing," he added. "The area is around 5 kilometers (3 miles) long."

Early Thursday afternoon, police received a separate, unverified report that a group of another five or six people may be missing, but "we don't know yet whether this group is missing in this area, or whether these people are missing at all," or have left the area, Mittner said.

An alarm system went off Wednesday in time to allow for the evacuation of about 100 local residents.

Markus Walzer, a Graubuenden police spokesman, said the alarm system was put in place after a similar mudslide in the region five years ago. He said the weather in the region had been good in recent days, and the cause of the mudslide wasn't immediately known.

Mittner said that Bondo would remain sealed off until at least Friday morning. It wasn't immediately clear when residents might be able to return home.