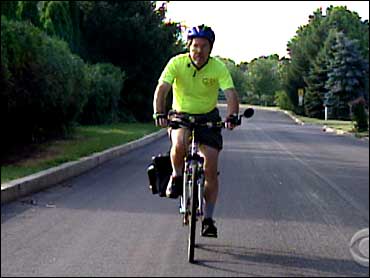 It's not unusual for a middle-aged-man to want some hot wheels. But in Rich Himmer's case, this isn't a mid-life crisis, CBS News correspondent Kelly Wallace reports.

He's kissing the gas-guzzling mini-van goodbye - and biking to work.

Motivated by a little peer pressure … "It's just subliminal peer pressure," said commuter Bob Bristow. "You know, 'he rode in, but I was a wuss today.'"

But there are no wusses in Rocky Balboa's hometown. This Philadelphia bike store has sold 478 bikes so far this year. That's double the number sold at this point last year.

One national biking group estimates at least one million Americans are now biking to work.

It might be an uphill climb in the United States, but not in Europe, where gas is nearly $9 a gallon.

Paris started a bike-sharing program a year ago - renting bikes on an hourly basis, and so far it's been used 25 million times.

And bike sharing is moving across the pond. Before the summer ends, Washington, D.C., will really be "spin city."

"It's very simple," said Eric Gilliland of the Washington Area Bicyclist Association. "Swipe your card, use the bike for up to three hours without charges and bring it back to any of the other locations."

And bikes made for commuters are flying off the shelves. There's a place for your bag, a comfy seat and some even have electric assistance to help make the ride a little easier.

Blog: Kelly Wallace gives a bike a spin to work.

Himmer gets the help he needs - the minute his office is in sight.

"Actually the best part is coming down the little hill here," he said. "Because I'm like, 'hey, it's downhill the rest of the way.'"

This is one of those rare cases where at 55, saying "it's all downhill from here" is a good thing!