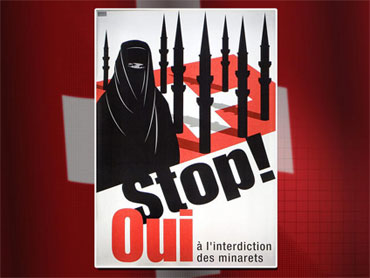 Swiss voters overwhelmingly approved a constitutional ban on minarets on Sunday, barring construction of the iconic mosque towers in a surprise vote that put Switzerland at the forefront of a European backlash against a growing Muslim population.

Muslim groups in Switzerland and abroad condemned the vote as biased and anti-Islamic. Business groups said the decision hurt Switzerland's international standing and could damage relations with Muslim nations and wealthy investors who bank, travel and shop there.

"The Swiss have failed to give a clear signal for diversity, freedom of religion and human rights," said Omar Al-Rawi, integration representative of the Islamic Denomination in Austria, which said its reaction was "grief and deep disappointment."

Some 2.67 million people voted 57.5 to 42.5 percent in favor of the referendum by the nationalist Swiss People's Party, which labeled minarets as symbols of rising Muslim political power that could one day transform Switzerland into an Islamic nation. Voters in only four of the 26 cantons or states opposed the initiative, granting the double approval that makes it part of the Swiss constitution.

Muslims comprise about 6 percent of Switzerland's 7.5 million people. Many are refugees from the Yugoslav wars of the 1990s and fewer than 13 percent practice their religion, the government says. Swiss mosques have not traditionally broadcast the call to prayer outside their own buildings.

The sponsors of the initiative said the growing Muslim population was straining the country "because Muslims don't just practice religion. They increasingly make political and legal demands."

Local officials and rights defenders objected to campaign posters showing minarets rising like missiles from the Swiss flag next to a fully veiled woman.

"The minaret is a sign of political power and demand, comparable with whole-body covering by the burqa, tolerance of forced marriage and genital mutilation of girls," the sponsors said. They noted that Turkish Prime Minister Recep Tayyip Erdogan has compared mosques to Islam's military barracks and called "the minarets our bayonets."

Anxieties about growing Muslim minorities have rippled across Europe in recent years, leading to legal changes in some countries. There have been French moves to ban the full-length body covering known as the burqa. Some German states have introduced bans on head scarves for Muslim women teaching in public schools. Mosques and minaret construction projects in Sweden, France, Italy, Austria, Greece, Germany and Slovenia have been met by protests.

But the Swiss ban in minarets, sponsored by the country's largest political party, was one of the most extreme reactions.

"It's a sad day for freedom of religion," said Mohammed Shafiq, the chief executive of the Ramadhan Foundation, a British youth organization. "A constitutional amendment that's targeted towards one religious community is discriminatory and abhorrent."

He said he was concerned the decision could have reverberations in other European countries.

Amnesty International said the vote violated freedom of religion and would probably be overturned by the Swiss supreme court or the European Court of Human Rights.

The seven-member Cabinet that heads the Swiss government spoke out strongly against the initiative but the government said it accepted the vote and would impose an immediate ban on minaret construction.

It said that "Muslims in Switzerland are able to practice their religion alone or in community with others, and live according to their beliefs just as before."

It took the unusual step of issuing its press release in Arabic as well as German, French, Italian and English.

The results were in stark contrast to opinion polls, last taken 10 days ago, that showed 37 percent supporting the proposal. Experts said before the vote that they feared Swiss had pretended during the polling that they opposed the ban because they didn't want to appear intolerant.

"The sponsors of the ban have achieved something everyone wanted to prevent, and that is to influence and change the relations to Muslims and their social integration in a negative way," said Taner Hatipoglu, president of the Federation of Islamic Organizations in Zurich. "Muslims indeed will not feel safe anymore."

The People's Party has campaigned mainly unsuccessfully in previous years against immigrants with campaign posters showing white sheep kicking a black sheep off the Swiss flag and another with brown hands grabbing eagerly for Swiss passports.

The four Swiss minarets now standing are unaffected by the amendment, which was turned down only in the urban French-speaking cantons of Geneva, Vaud and Neuchatel as well as the German-speaking city of Basel.

Geneva's main mosque was vandalized Thursday when someone threw a pot of pink paint at the entrance. Earlier this month, a vehicle with a loudspeaker drove through the area imitating a muezzin's call to prayer, and vandals damaged a mosaic when they threw cobblestones at the building.
By Associated Press Writer Alexander G. Higgins; AP Writers Shafika Mattar in Amman, Jordan, Eliane Engeler in Basel, Jennifer Quinn in London and Giovanni Fontana in Rome contributed to this report