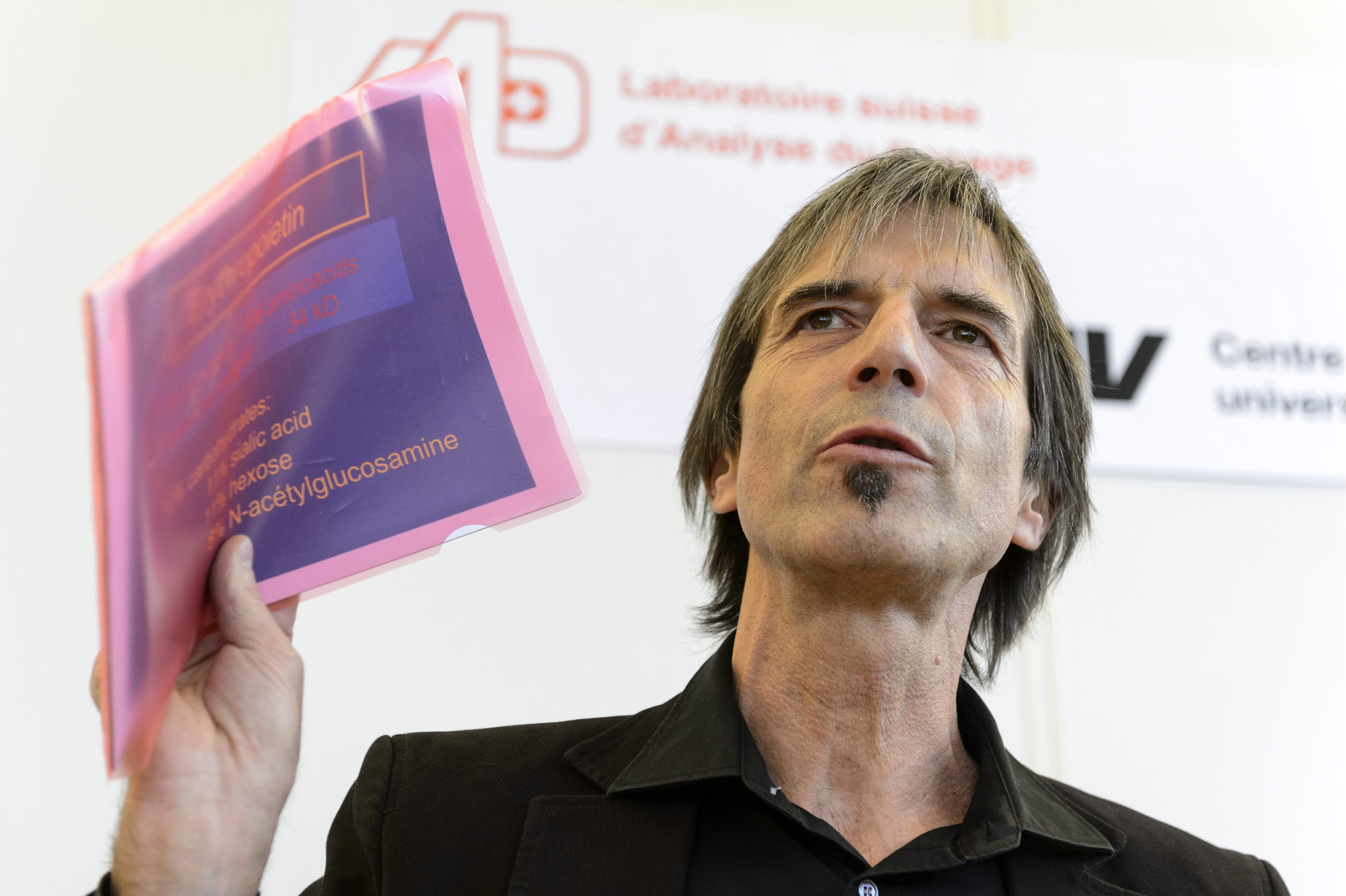 Lab director Martial Saugy called a news conference to answer accusations by Tygart that he provided Armstrong with information on how to avoid detection for use of the blood-boosting drug EPO.

Tygart told the U.S. television program "60 Minutes Sports" on Wednesday that Saugy acknowledged to him that he gave Armstrong and his team manager, Johan Bruyneel, "the keys to beating EPO tests" before the 2002 Tour de France.

"The answer is clear: It's 'No'," Saugy said Friday, adding he was "surprised" by the claim. "I would like to ask him (Tygart), really personally, why did he say that, because personally it was not the case."

Saugy suggested that Tygart had "deficiencies" in his recollection of their discussion in Moscow in 2010 soon after U.S. federal investigators opened a probe into Armstrong and doping in cycling.

"I don't really understand the interpretation on that part of the discussion," Saugy later told The Associated Press in an interview. "For me it is a nonsense."

In the TV program, Tygart said he asked Saugy: "Did you give Lance Armstrong and Johan Bruyneel the keys to beating EPO tests?"

"And he nodded to say 'yes,'" Tygart said. "He explained to them, just the two of them. As far as I know, it's unprecedented. It's completely wrong to meet an athlete with a suspect result and explain to him how the test works."

Saugy acknowledged his respect for Tygart, with whom he worked with on a previous case involving Armstrong's former teammate Tyler Hamilton. Tygart's determination to build a case against Armstrong for using EPO and other performance-enhancing drugs was crucial after the federal case was dropped early last year.

Armstrong was stripped of his seven Tour de France titles and banned from the sport for life after USADA released a report last year detailing widespread doping by the American rider and his teams.

"Travis Tygart is a key person in the fight against doping," Saugy said, before adding, "He knows the rules. He knows we must be transparent in order to respect the right of the defense. We need also to respect all the other athletes."

Saugy said he followed the International Cycling Union's request to meet with Armstrong in Luxembourg before the 2002 Tour started.

The Swiss official denied suggestions he had made an error or was naive in meeting the rider to discuss anti-doping strategy - a decision now being criticized by Tygart and World Anti-Doping Agency officials as a clear conflict of interest.

"I have absolutely no regret. I would repeat it," Saugy told The AP, explaining that Armstrong and other riders at that time had a right to information about false positive results in the relatively new EPO test. "They wanted to know what is the basis of the fight against doping."

In the "60 Minutes Sports" interview, Tygart described Armstrong and his team of doctors, coaches and riders as similar to a "Mafia" that kept their secret for years and intimidated riders into silently following their illegal methods.

Armstrong will give his first television interview since the sanctions were imposed when he speaks with Oprah Winfreynext Thursday.

Ray Rice's wife tells her side of the story