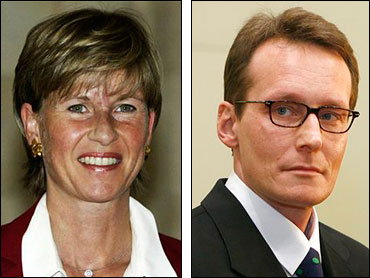 A man dubbed "the Swiss gigolo" by the German media was sentenced to six years in prison Monday for defrauding Germany's richest woman of euro7 million ($9 million) and attempting to blackmail her for tens of millions more.

Helg Sgarbi had admitted to the Munich court that he threatened to release secretly recorded videotapes of trysts with BMW heiress Susanne Klatten, 46, unless the married woman gave him millions of euros to keep quiet

The 44-year-old also admitted convincing Klatten to give him euro7 million ($9 million) by saying it was for the treatment of a girl left paraplegic after a car crash with Sgarbi.

Klatten did not attend the four-hour trial, and her attorney made no statement to the court. Her spokesman was not immediately available for comment.

Sgarbi told to the court he met Klatten at a spa near Innsbruck, Austria, in July 2007 and started an affair. Using what prosecutors called a well-practiced scam, he told Klatten that he was involved in a car accident in the United States that left the girl paralyzed, and convinced Klatten to give him the cash for her treatment.

Sgarbi then demanded Klatten leave her family and invest euro290 million ($367 million) in a trust for him, according to the indictment. When she refused, he threatened to release secretly filmed videos of their affair.

Sgarbi demanded euro49 million ($62 million) not to tell her family, the heads of her companies and the media. He lowered the demand to euro14 million ($17.72 million) but Klatten instead went to the police in January 2007. Sgarbi was arrested shortly in Austria's Tyrolean Alps and has been held in detention since.

"The only victim who came to us and gave a witness statement is Mrs. Klatten. We had to find the others, with great difficulty," Steinkraus-Koch said.

Klatten is the daughter of the late BMW magnate Herbert Quandt and holds a 46 percent stake in the company along with her mother and brother. She also owns a 88.3 percent share of chemical company Altana.

Forbes magazine listed her as the 68th richest person in the world last year, with a personal fortune of around $9.6 billion (euro7.58 billion). The story has attracted vast media attention in Germany, where the Quandt family is regarded as quasi-royalty.

Sgarbi was also convicted of taking euro2.4 million ($3 million) from three other women in similar scams. Prosecutors did not release the names of the three other victims.

"I deeply regret what has happened and apologize to the aggrieved ladies in this public hearing," Sgarbi told the court. Sgarbi's lawyer, Egon Gries, said his client would not answer any questions about where the money had gone or whether anyone had helped him.