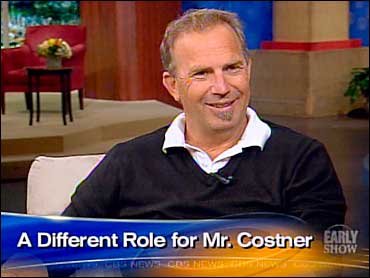 "Swing Vote" star Kevin Costner, has many wondering which side of the presidential fence he's on, considering it's the basis of his new film.

Don't expect to hear Costner endorsing either presidential candidate any time soon, though.

"I will at one point," Costner told Early Show co-anchor Maggie Rodriquez. "I'll publicly say. I don't always do that. I'm not always out there in terms of campaigning for someone. But I have a choice."

Rodriquez attempted to get Costner to fess up, but he wouldn't budge. They joked, saying that she was the reporter trying to get the scoop, just like a scene in the film.

Although Costner doesn't typically speak out during presidential elections, he says "there's nothing wrong with saying who you think you're for."

There are a lot of hot topic issues that are raised in the film, in which Costner put in $20 million of his own money to help fund.

"That's what the movie does so effectively," Costner said. "It deals with immigration, with gay rights. It deals with abortion - topics that you actually can lose friends over during dinner. And yet in this movie, if you can believe it, you find yourself laughing out loud. So this movie runs a very interesting edge."

Costner, who has played legendary characters over the years, takes on a more unconventional role in "Swing Vote." He plays Bud Johnson, a lazy, beer-drinking father suddenly thrust into the world of politics.

The film includes two financial presidential candidates, played by Kelsey Grammer and Dennis Hopper, who woo Costner into voting for them.

Costner, who must cast the deciding vote in the presidential election, gets caught in the hoopla as the candidates raise the stakes and do anything in their power to win over the last determining vote.

"We know that a human nature, the desire to win can sometimes be so strong," Costner admitted. "What we really hope is that our candidates will possess the character to collect themselves and understand that, you know, maybe that's not who they are. You know, but the temptations are there."

In the film, Costner's daughter is doing her fifth grade civics lesson, which involves watching their parents go to the polls and vote.

"And of course I'm not what you call a PTA dad or a soccer pop. So he doesn't make it to the polls, which is indicative of their relationship," Costner said. "He kind of disappoints her a lot. It's sad. The movie breaks your heart sometimes. You laugh. It's that great experience you can have in two hours in the dark."

Like the memorable message in "Field of Dreams" -- "if you build it they will come" -- "Swing Vote" has "if you woo him you will get his vote."

"I thought it was a great American movie. I think it has a chance to be classic. I think whenever something has that, you can't ignore it. I still love telling stories. And this is a comedy and there's nothing greater than to be able to laugh," he said.

"And at the end of the day to actually be moved. That's what happens with this movie. I think a lot of people surprisingly, like "Field of Dreams," end up with a lump in their throat, something they didn't expect to happen happens."