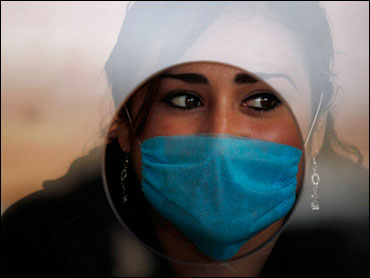 A deadly virus is quietly killing about 3,500 Americans a month, and there's nothing that modern medicine can do about it.

That virus appears every year during the influenza season and causes more than 200,000 hospitalizations in the United States and about 41,000 deaths.

By comparison, swine flu has caused one confirmed death in the United States - in the case of a toddler visiting from Mexico, and seven confirmed deaths south of the border. Mexican Health Secretary Jose Cordova says he believes the situation is stabilizing, and the Centers for Disease Control and Prevention reports the need for hospitalization in the U.S. is rare.

Yet Web sites selling N95 respirator masks crashed on Monday due to a deluge of orders, Purell hand sanitizer is out of stock at Drugstore.com, and Amazon.com. Cable TV hosts - in a flurry of alarmism ably captured by Jon Stewart on the Daily Show - have pressed the panic button. Repeatedly.

It's reasonable, of course, to wash your hands more frequently and make sure you have extra food and water on hand. But then again, it's always prudent to do that: every corner of this country experiences natural disasters that could disrupt electricity, water, gas, or other services for days or even weeks.

Unfortunately, government officials - never willing to let a good crisis go to waste - seem more prone to extreme measures than the rest of us.

Lebanon's health minister is discouraging friendly kisses on cheeks. France wants a Europe-wide ban on flights to Mexico, contrary to the World Health Organization's recommendations, even though Europe already has confirmed cases of swine flu.

Egyptian farmers rioted after their government ordered the slaughter of up to 400,000 pigs, even though no cases have been reported in that country. (U.S. pork producers' lobbying to rename swine flu now seems perfectly understandable.)

To his credit, President Obama struck a more even tone in his press conference on Wednesday evening, saying: "The most important thing right now that public health officials have indicated is that we treat this the same way that we would treat other flu outbreaks, just understanding that, because this is a new strain, we don't yet know how it will respond."

(Perhaps Mr. Obama may want to tell his Department of Homeland Security to stand down on the whole quarantine thing.)

To be sure, we should make allowances for government officials with the jitters: H1N1 at first seemed more deadly than it now appears to be, reliable data from Mexico has been lacking, and the concentration of deaths in Mexico City remains puzzling. It's possible that the virus could mutate to a more virulent form in a few months, and bureaucratic instincts naturally provoke overreaction rather than underreaction.

But governmental overreaction can cause more serious problems than a run on N95 masks. The legitimate quarantine power of governments can be misused, or used too broadly.

Misinformation can be spread, which happened during the 1918 flu and cost thousands of people their lives. (A Colorado Department of Human Services manual about pandemics for public health workers is delightfully frank, saying someone should "decide if publicizing mortality rates is helpful." Because Americans can't be trusted with the truth?)

Perhaps the best example of governmental overreaction to influenza came in 1976, when an outbreak of swine flu struck Fort Dix Army base in New Jersey. After a 19-year-old private died, President Gerald Ford ordered a nationwide vaccination program that eventually reached 40 million people, or about 24 percent of the United States population at the time.

Without the vaccine, Health Secretary F. David Matthews solemnly predicted at the time: "We will see a return of the 1918 flu virus that is the most virulent form of the flu. In 1918 a half million Americans died. The projections are that this virus will kill one million Americans in 1976."

The vaccination program turned out to be a deadly mistake. Reports soon surfaced about the vaccine causing a neuromuscular disorder called Guillain-Barré syndrome, and vaccinations were halted about two months after they began.

No swine flu epidemic ever erupted. The outbreak was limited to Fort Dix, and about 500 Americans likely died as a result of the vaccine.

It's true that Mr. Obama appears more level-headed than his predecessor, and the state of medicine (including anti-viral drugs) has advanced considerably. But even the CDC and WHO are hardly prescient: the 1976 episode should remain a cautionary tale of how not to respond to an outbreak of influenza.

I encourage you to bookmark the home page for my Other People's Money column. An RSS feed is available too. If you have questions, feedback, or suggestions, please feel free to e-mail me at declan@cbsnews.com. Declan McCullagh.Declan is the chief political correspondent for CBSNews.com. Previously, he was Wired's Washington bureau chief and a reporter for Time.com and Time magazine in Washington, D.C. He has taught journalism, public policy, and First Amendment law. He is an occasional programmer, avid analog and digital photographer, and lives with his wife in the San Francisco Bay area.