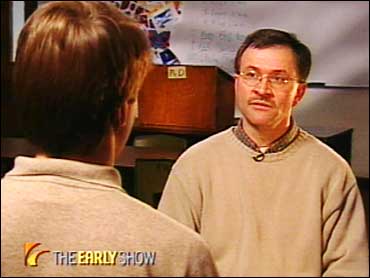 Everybody has a story, at least that's what CBS News Correspondent Steve Hartman has proven time and again after the toss of a dart determines a destination from any of the 50 states. For this week's story, he landed in North Dakota for the very first time.

"This is unbelievable! This is awesome," said 39 year-old Rich Dufault after hearing the news of being the target of this week's story.

Dufault lives with in Killdeer with his wife Karen, their daughter Amber and sons Austin and Zach.

He's a high school teacher and basketball coach with such a powerful smile that can even stand up to a school lunch.

Such a positive attitude once infected the entire town.

"This community was together like I hadn't seen it together in a long, long time," said Dufault.

It happened two years ago.

"I still get chills just sitting here with you," he told Hartman.

Dufault was in his first year as head basketball coach at tiny Killdeer High.

Townspeople remembered that time with the following words:

"The more you win, the more fired-up you get, the more people go and see it."

"You have to get there early so you can get a seat."

"A lot of people were following it."

"You just got this feeling that you had to be part of it."

"Everybody said you know, 'We've got a shot at state.'"

It had been nearly half a century since Killdeer last went to a state tournament. And if anybody could feel their pain it was Dufault.

"It's kind of a dream I've been chasing for a long time."

During high school, his team was just a game away from a Minnesota state tournament - when the star player fouled out - in a losing effort.

Now, 25 years later, redemption was a game away.

The game unfolded just like a movie. Underdog team - down the whole night - is fired up by their coach and pulls ahead with four minutes to go. But movies need Hollywood endings.

"They do," said Dufault. "But this is reality TV. And sometimes there's a winner and a loser."

After the game, Dufault felt as though he'd let down his team, maybe let down the entire town.

"As we walked into the school, the kids were putting their things away. And I looked down to the lunchroom – and there were the moms, and the dads, and all the fans...and...it was unconditional," he said.