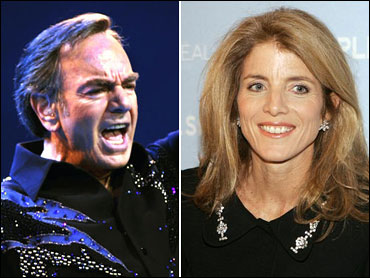 Neil Diamond held onto the secret for decades, but he has finally revealed that President Kennedy's daughter was the inspiration for his smash hit "Sweet Caroline."

"I've never discussed it with anybody before - intentionally," the 66-year-old singer-songwriter told The Associated Press on Monday during a break from recording. "I thought maybe I would tell it to Caroline when I met her someday."

He got his chance last week when he performed the song via satellite at Caroline Kennedy Schlossberg's 50th birthday party.

Diamond was a "young, broke songwriter" when a photo of the president's daughter in a news magazine caught his eye.

"It was a picture of a little girl dressed to the nines in her riding gear, next to her pony," Diamond recalled. "It was such an innocent, wonderful picture, I immediately felt there was a song in there."

Years later, holed up in a hotel in Memphis, he would write the words and music in less an hour.

"It was a No. 1 record and probably is the biggest, most important song of my career, and I have to thank her for the inspiration," he said. "I'm happy to have gotten it off my chest and to have expressed it to Caroline. I thought she might be embarrassed, but she seemed to be struck by it and really, really happy."

The enduring hit recently reappeared on the singles chart, thanks in part to the Boston Red Sox. "Sweet Caroline" is played at every home game.

"I think they consider it good luck," Diamond said, adding that the Red Sox have become his favorite baseball team.

The tune's return to the charts leaves Diamond "speechless," he said: "That song was written 40 years ago, so I am just overwhelmed by the fact that it has returned and that, more importantly, people have taken it into their hearts for so many years."

Diamond is currently at work on a new album, his second collaboration with producer Rick Rubin.

"We're both very excited about it," Diamond said. "I think it's going to be one of my best ever."