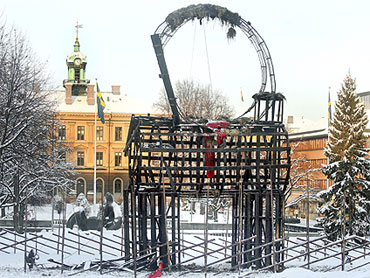 A straw goat was burned down yet again early Wednesday in a Swedish city where torching it has become a Christmas tradition.

"It feels very sad," Ostman said. "We had really hoped that he would survive Christmas and New Year's.

Vandals have burned down the goat 24 times since it was first set up in Gavle in 1966 to mark the holiday season. It has also been smashed several times, run over by a car and had its legs cut off.

In 2006 and 2007 city officials doused it in fireproofing chemicals. Ostman said they stopped doing that because it discolored the goat, making it "look like a brown terrier instead of a yellow straw goat."

The goat is a centuries-old Scandinavian yule symbol that preceded Santa Claus as the bringer of gifts to Swedish homes. Many Swedes place a small straw goat underneath their Christmas trees, or hang miniature versions on the branches.

While city officials are always quick to condemn the vandals who set the goats ablaze, they have also become increasingly aware of the international attention the near-yearly attacks draw to Gavle, about 90 miles (150 kilometers) north of Stockholm.

This year the city Web site offers users a chance to follow the goat's fate via a Webcam, Twitter page and a blog - in both Swedish and English.

"So sad that I can't celebrate Christmas with you all, but thank you so much for now, dear friends," the blog said Wednesday. "I'm going on holiday now to get some rest - but will of course be back for next Christmas."

Vandals are seldom caught, but in 2001, a 51-year-old visitor from Cleveland, Ohio, spent 18 days in jail for setting it ablaze.

In 2005, the goat was burned down by two arsonists dressed up as Santa Claus and the Gingerbread Man. They were never caught.