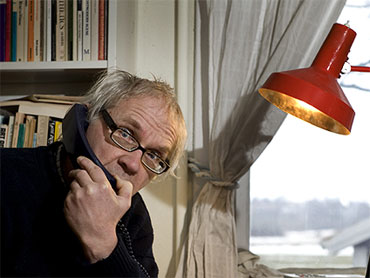 A Swedish artist who angered Muslims by depicting the Prophet Muhammad as a dog said Tuesday he was assaulted while giving a lecture at a university.

Lars Vilks told The Associated Press a man in the front row ran up to him and head-butted him during the lecture at Uppsala University. Vilks says his glasses were broken but he was not injured. It wasn't immediately clear what happened to the attacker.

Vilks said a group of about 15 people had been shouting and trying to interrupt the lecture before the incident. Many of them stormed the front of the room after the attack and clashed with security guards as Vilks was pulled away into a separate room, he said.

Vilks was giving a lecture about the limits of the freedom of expression in the world of art.

The Swedish artist says he has received repeated death threats over his drawing of Muhammad with a dog's body.

A U.S. woman faces a life term on accusations that she pledged to murder Vilks. Colleen LaRose, was arrested in Oct. 15 upon returning to Philadelphia from Europe. She has pleaded not guilty to a four-count indictment.

In March, Vilks said he has no regrets and believes the suspects in an alleged plot to kill him were not professionals.

Vilks has faced numerous death threats over the controversial cartoon, but said in March he has built his own defense system, including a "homemade" safe room and a barbed-wire sculpture that could electrocute potential intruders.

He said he also has an ax "to chop down" anyone trying to climb through the windows of his home in southern Sweden.

"If something happens, I know exactly what to do," Vilks told The Associated Press in an interview in Stockholm.

The 63-year-old artist said the suspects in an alleged plot to kill him - seven people arrested in Ireland and a Philadelphia woman held in the U.S. - were "not the real hard professionals. I think they are rather low-tech."

He said he had learned from American media reports that the woman held in the U.S., Colleen R. LaRose, who had called herself JihadJane in a YouTube video, had visited the area where he lives, but he didn't know whether that was correct. "I'm glad she didn't kill me," Vilks said, with a half-smile.

An eccentric man with disheveled gray hair and thick-lensed glasses, Vilks referred to himself as "the artist" and described his life after his Muhammad drawing was first published by a Swedish newspaper in 2007 as if it were a movie plot.

"It's a good story. It's about the bad guys and a good guy, and they try to kill him," he said.

Vilks' drawing was not among the 12 Danish newspaper cartoons of Muhammad that sparked furious protests in Muslim countries in 2006.

It drew international attention more than a year later after a Swedish art gallery refused to put it on display, citing security concerns. A Swedish newspaper printed the drawing alongside an editorial defending the freedom of expression.

Swedish police have kept a close eye on threats against Vilks, but he doesn't have round-the-clock protection. He was temporarily moved to a secret location after al Qaeda in Iraq put a $100,000 bounty on his head.

The controversial drawing was printed in Stockholm papers Dagens Nyheter and Expressen and the Malmo daily Sydsvenska Dagbladet.