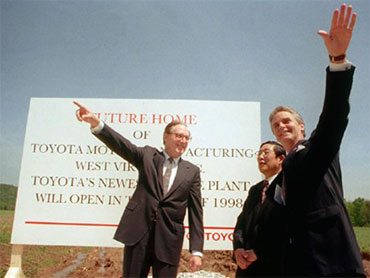 A father is asking Toys "R" Us to take a popular toy set off the shelves because the one he bought for his 6-year-old son utters a curse word.

"I've had to explain to parents why my son is saying the f-word; it's horrible," said Philip Morton. "It's really a cute little toy; but God forbid, it's not what I want my kid hearing."

Morton returned the toy to the Geoffrey store where he bought it. The chain is owned by Toys "R" Us.

Store managers gave him a set that didn't include the obscene word, but have declined to stop selling the toy and referred Morton to the manufacturer. A spokeswoman for Wayne, N.J.,-based Toys "R" Us did not immediately respond to a request for comment from The Associated Press on Wednesday.

The manufacturer, TekNek Toys International L.P., has also said it won't pull the toy, but will examine Morton's complaint.

Michelle Perea, the products and marketing manager for TekNek, said the recorded voice actually says "stop," not a curse word. The voice is an adult's, while the other recordings are those of children.

"I understand they can't check every toy on the shelf," Morton said. "But if one doesn't say it and one does, maybe someone is playing a game and got in a hurry and forgot about it. Personally, I think they should be held liable."