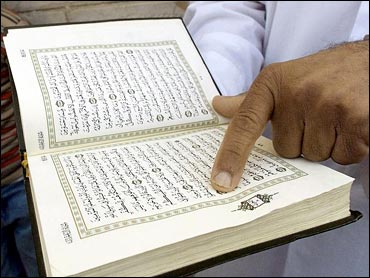 This column was written by Eugene Volokh.


The U.S. Constitution is a multiculturalist document. Not in all senses, of course: It tries to forge a common national culture as well as tolerating other cultures. But it is indeed multiculturalist in important ways.

We shouldn't forget that when we're tempted to categorically condemn supposedly multiculturalist changes to our constitutional practices.

Consider what Dennis Prager — whose work I often much like — wrote in his most recent column:

Keith Ellison, D-Minn., the first Muslim elected to the United States Congress, has announced that he will not take his oath of office on the Bible, but on the bible of Islam, the Koran.

He should not be allowed to do so — not because of any American hostility to the Koran, but because the act undermines American civilization.

First, it is an act of hubris that perfectly exemplifies multiculturalist activism — my culture trumps America's culture. What Ellison and his Muslim and leftist supporters are saying is that it is of no consequence what America holds as its holiest book; all that matters is what any individual holds to be his holiest book.

Forgive me, but America should not give a hoot what Keith Ellison's favorite book is. Insofar as a member of Congress taking an oath to serve America and uphold its values is concerned, America is interested in only one book, the Bible. If you are incapable of taking an oath on that book, don't serve in Congress. In your personal life, we will fight for your right to prefer any other book. We will even fight for your right to publish cartoons mocking our Bible. But, Mr. Ellison, America, not you, decides on what book its public servants take their oath.

This argument both mistakes the purpose of the oath, and misunderstands the Constitution. In fact, it calls for the violation of some of the Constitution's multiculturalist provisions.

To begin with, the oath is a religious ritual, both in its origins and its use by the devout today. The oath invokes God as a witness to one's promise, as a means of making the promise more weighty on the oathtaker's conscience.

This is why, for instance, the Federal Rules of Evidence, dealing with the related subject of the courtroom oath, state, "Before testifying, every witness shall be required to declare that the witness will testify truthfully, by oath or affirmation administered in a form calculated to awaken the witness' conscience and impress the witness' mind with the duty to do so."

If you want the oath to be maximally effective, then it is indeed entirely true that "all that matters is what any individual holds to be his holiest book." That book is the one that will most impress the oathtaker's mind with the duty to comply with the oath.

Of course, some might care less about making the oath more effective, and more about using the oath to reinforce traditional American values, in which they include respect for the Bible (the "only ... book" "America is interested in") over other holy books. That, I take it, is part of Prager's argument, especially when he goes on to say, "When all elected officials take their oaths of office with their hands on the very same book, they all affirm that some unifying value system underlies American civilization."

What's more, the Constitution itself expressly recognizes the oath as a religious act that some may have religious compunctions about performing. The religious-test clause is actually part of a longer sentence: "The Senators and Representatives ... [and other state and federal officials] shall be bound by Oath or Affirmation, to support this Constitution; but no religious Test shall ever be required ..." The option of giving an affirmation rather than oath reflects the judgment — an early multiculturalist judgment — in favor of accommodating members of some denominations (such as Quakers) who read the Bible as generally prohibiting the swearing of oaths.

The affirmation option was thus one tool to make sure that the law didn't exclude people of certain religious groups from office, but rather let them retain their religious culture while participating in American civic life. The religious-test clause was another tool. The Constitution itself — a pretty important part of the "value system underl[ying] American civilization" — expressly makes clear that elected officials need not take oaths of office with their hands on any book.

So the Constitution thus already expressly authorizes people not to swear at all, but to affirm, without reference to God or to a sacred work. Atheists and agnostics are thus protected, as well as members of certain Christian groups. Why would Muslims and others not be equally protected from having to perform a religious ritual that expressly invokes a religion in which they do not believe? Under the Constitution, all of them "are incapable of taking an oath on that book," whether because they are Quakers, atheists, agnostics or Muslims. Yet all remain entirely free to "serve in Congress."

This leaves one milder form of Prager's argument: Ellison shouldn't have to swear on the Bible, but we don't have to offer him a Koran, since he could affirm instead and affirmations don't require any holy book. That's not, I think, Prager's actual argument (which is that "If you are incapable of taking an oath on that book [the Bible], don't serve in Congress" and that all elected officials should "take their oaths of office with their hands on the very same book"). But it might be a fallback.

Yet this too strikes me as a misreading of the American constitutional system. Prager goes on to argue:

Devotees of multiculturalism and political correctness who do not see how damaging to the fabric of American civilization it is to allow Ellison to choose his own book need only imagine a racist elected to Congress. Would they allow him to choose Hitler's "Mein Kampf," the Nazis' bible, for his oath? And if not, why not? On what grounds will those defending Ellison's right to choose his favorite book deny that same right to a racist who is elected to public office?

But the Constitution's judgment is that accommodating religious pluralism (especially as to oaths) doesn't let "my culture trump America's culture." Rather, the legal culture created by the Constitution makes room for many religious cultures, and allows all their adherents to be equal citizens and equal officeholders.

We see this in the Constitution's repeated recognition of affirmations as alternatives to oaths. We also see this in the free-exercise clause, which excludes no religion even though many denominations of that era saw rival denominations' views, and especially the views of Catholics, as deeply wrong and even evil — perhaps not quite as evil as Mein Kampf (which isn't a religious book, and thus not really apposite to the oath debate) but in that general ballpark.

The Supreme Court has long taken the view that the establishment clause and the free-exercise clause generally mandate equal treatment of people without regard to their religions; conservative justices, such as Scalia and Thomas, have agreed.

Letting Christians swear the oath of office, while allowing members of other denominations only to swear what ends up being a mockery of an oath — a religious ceremony appealing to a religious belief system that they do not share — would be such discrimination.

Nor have I seen any evidence that at the time of the framing, the religion clauses would have been interpreted in a way that differs from this consensus. And the text of the establishment clause suggests that the oath should be an oath not just of a federally "establish[ed] religion" (a religion given favored legal treatment by the government), but rather the oath that binds the particular officeholder "to support this Constitution."

Finally, Prager argues that "for all of American history, Jews elected to public office have taken their oath on the Bible, even though they do not believe in the New Testament, and the many secular elected officials have not believed in the Old Testament either."

I can't speak to the common practices of Jewish officeholders, but some quick searches reveal that Linda Lingle, the governor of Hawaii, was sworn in on the Tanakh (more or less the Old Testament); for the reasons I just mentioned, others would have been free to do the same, or to affirm if they preferred.

A Senate Web site reports that Presidents Franklin Pierce and Herbert Hoover (a Quaker) didn't swear at all, but rather affirmed. If a Bible was present (the site is silent on that), it wouldn't have been used as a swearing device. Nixon, also a Quaker, did swear, apparently on two Bibles. This didn't seem to help.

Much folly has been urged in the name of multiculturalism. But this is no reason to dismiss the core notion that a nation should both create a common culture and leave people with the freedom to retain important aspects of other cultures — especially religious cultures.

That notion is deeply American, and expressly enshrined in our Constitution. If it is "political correctness," it is so only in the sense that it's a political notion, and a correct one. It has served us well, even when dealing with religious groups that were once hated and seen as incompatible with American values, such as Catholics.

We ought not blindly accept the legitimacy of other cultures' beliefs. But the Constitution says that we can't demand complete surrender to our majority culture — especially its religious beliefs — either in "personal life" or in public life.
By Eugene Volokh
Reprinted with permission from National Review Online