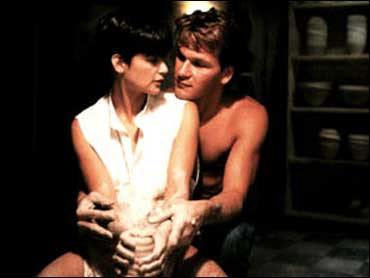 Seventeen years after its theatrical release, "Ghost" remains a classic and a fantastic love story.

To mark the release of a special collector's edition DVD, People magazine assistant managing editor and The Early Show contributor Jess Cagle had a conversation with Patrick Swayze, the movie's leading man — who nearly did not get the part.

It's hard to imagine "Ghost" without Swayze, but director Jerry Zucker didn't even want him to audition. (He had seen "Roadhouse" and let it be known: "Over my dead body will 'Roadhouse' Patrick Swayze ever play this role.' ")

But once Swayze read the script, he was determined, recalling, "I love romance. I love goose bumps. And I read it and it left me boo-hooing, and I was just, like, I have to do this movie."

Zucker finally allowed him to shoot a screen test with Demi Moore, who already had been cast as Molly.

Recalls Zucker, "He read the end of the movie. We all had tears in our eyes. As soon as he left the room, I said, 'He's got the part.' "

Next, Swayze convinced the director to audition Whoopi Goldberg for the role of wacky psychic Oda Mae Brown, another bit of casting that Zucker was dead set against. (He was thinking of Goldberg as a stand-up comedian, not an actress.)

Apparently, Zucker had auditioned many other actresses for the role, including Oprah Winfrey and Tina Turner. But Swayze had seen one of Goldberg's one-woman shows on Broadway and was convinced she would be perfect for the part.

2Swayze says he and Goldberg clicked right away, telling Cagle, "We were just like girlfriends … I met my match with Whoopi 'cause she's got a mouth like a sailor and funny, funny, funny. So we just started improvising together. After we were done, Jerry cast her on the spot."

Goldberg went on to win an Oscar for her performance. Another Academy Award went to Bruce Joel Rubin for his screenplay. (Rubin provides commentary on the newly released DVD.)

For Swayze, the film remains a touchstone in his life. He explains, "There's just something about the movie that just validates the idea that the only thing you can take with you when you die is the love you have in your heart."

Of course, for many people, the scene that comes to mind is the one with the pottery wheel and the wet clay. Swayze says ruining the pot wasn't in the script.

"No, no, it wasn't. But I screwed it up," he says with a laugh. "I did it on purpose 'cause I thought, 'Well, let me just throw a little curve ball in here and see what happens.' "

And who knew pottery could be so sensual?

"Two people properly oiled," recalls Swayze. "It definitely was a sexy thing, and we just kept going. They never stopped the camera rolling, and we turned three or four scenes into one."