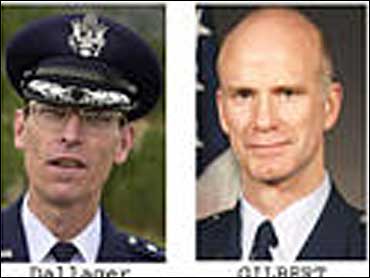 The outgoing Air Force Academy officer who oversees cadets endorsed his own removal Monday and expressed regret for making statements that suggested a cadet had invited a sexual assault.

In a telephone interview, Brig. Gen. Sylvanus Taco Gilbert III also said he was proud of his record because he helped clean up a drug problem and improved discipline.

Gilbert, 46, and other academy leaders are being replaced after criticism over how the academy has handled sexual assault reports. Dozens of female cadets have said they were ostracized or reprimanded after they told superiors they had been raped.

"When you take an organization in a very different direction the easiest way that we found in the Air Force to that is to bring in a new leadership team," Gilbert said.

Gilbert came under particular scrutiny for comments he made to the Denver weekly Westword about Lisa Ballas, a 21-year-old senior who had reported being raped. At one point, he compared her conduct to walking down an alley with $100 bills sticking out of a pocket.

In hindsight, Gilbert said he regretted those comments and others he made during a meeting with Ballas. "Knowing that she might misinterpret the words I would be a more effective communicator to her so that she would not see a blame but would see concern instead," he said.

"It was never my intention to rebuke or to criticize at all. My only concern was truly for the future safety, security and well-being of cadet Lisa Ballas," Gilbert said. "I had seen that she had gone through physical and emotional trauma and never wanted her to have to endure that again."

Gilbert said he was sent to the academy in August 2001 with orders to crack down on drug use and reinforce discipline. A primary goal was to ensure peer pressure did not interfere with the goals of excellence and integrity.

"We've worked on those issues a lot and I will tell you the academy culture is difficult to change when you have a short tenure," he said. "It's difficult to overhaul a culture. I feel that we have made some progress in those areas despite ... distractions we've had a long the way."

Gilbert is leaving this summer and will become special assistant to the deputy Air Force undersecretary for international affairs. He is being replaced by Brig. Gen. John A. Weida.

Gilbert's boss, retiring academy Superintendent Lt. Gen. John R. Dallager, said Monday that there is much work to be done, but disputed claims that the academy has a boys' club atmosphere that increases the risk of sexual assaults.

"I would agree that the culture with regard to trust and confidence, mutual respect, dignity and respect for one another can be strengthened and we work at that every year all year," Dallager said.