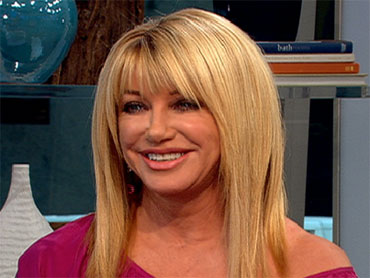 Actress Suzanne Somers is known for her roles on "Three's Company" and "Step By Step," as well as her exercise and diet plans. But for cancer research?

In her new book, "Knockout: Interviews with Doctors Who are Curing Cancer and How to Prevent Getting It," Somers shares what she describes as "groundbreaking and successful cancer prevention and care protocols incorporating chemo-free options that are available now."

Somers herself has stared cancer in the face -- including a shattering scare last November of "full-body cancer."

"For six days, six doctors confirmed I had inoperable cancer. I went into that valley of fear. I saw my death, it was horrible," Somers said.

Somers later learned she had been misdiagnosed. But, during the time Somers thought she had cancer, she spoke with several doctors and patients about their various treatments. She turned her research turned into a book about their responses, particularly the alternative treatments available for cancer patients.

The book has proven highly controversial, and she said she's been attacked by doctors for promoting treatments that avoid chemotherapy.

Click on the video below to see Somers address attacks on her book, in an interview with "Early Show" co-anchor Harry Smith.