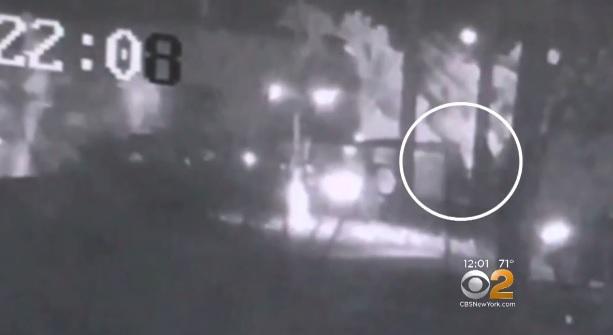 BELLPORT, N.Y. -- An off-duty firefighter is being credited with saving a woman's life after her SUV ended up on Long Island Rail Road tracks following a crash with another vehicle, CBS New York reports.

The station writes that the incident happened around 10:30 p.m. Tuesday. Volunteer Brookhaven firefighter Pete DiPinto Sr., who lives nearby the accident, heard a car crash while he was getting ready for bed.

The driver, Janice Esposito, was turning when another vehicle hit the passenger's side, sending her car onto the tracks, CBS New York says.

"I had no idea I was on the train tracks or that a train was even coming," she said.

That's when DiPinto came to her aid, pushing the airbags aside to get to her.

"She said she had no idea where she was and I said, 'You're on the tracks -- we gotta get you off now,'" DiPinto said. "I had no idea the train was coming at that moment."

He pulled Esposito across the passenger seat, dragging her to safety. About 10 seconds later the train slammed into the vehicle. They hid from flying shrapnel behind a silver utility shed.

Espostio, a mother of a 7-year-old boy, suffered only a few bumps and bruises, WCBS-AM reports.

"I can never repay him for this," she said. "I have a family. He saved my life."

DiPinto's wife of 44 years, Laura, went to the scene with him. As the train roared through, all she could do was watch.

"I didn't even know if my husband was safe at that point," she said.

The train conductor, engineer and the other driver were all uninjured.

The incident impacted service on the Montauk branch for a time Tuesday night, but service was restored overnight.