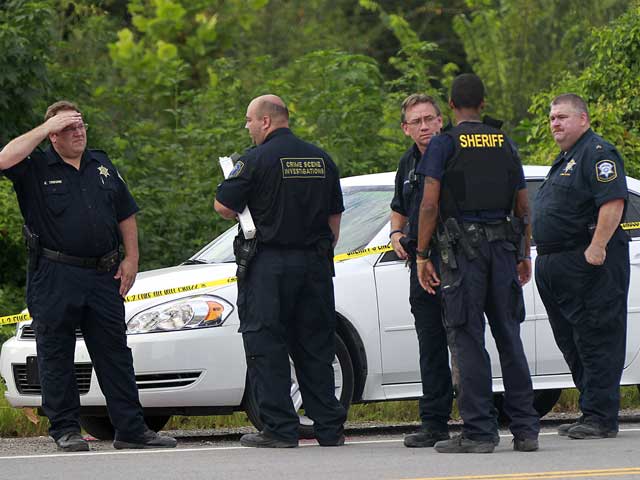 (CBS/AP) NEW ORLEANS - At least some of the seven people arrested in a fatal shootout with Louisiana deputies have been linked to violent anarchists on the FBI's domestic terrorism watch lists, a sheriff said Saturday.

Detectives had been monitoring the group before Thursday's shootout in Laplace in which two deputies were killed and two more wounded, said DeSoto Parish Sheriff Rodney Arbuckle. His detectives and other law enforcement discovered the suspects were heavily armed adherents to an ideology known as the "sovereign citizens" movement.

The FBI has classified "sovereign citizens" as people who believe they are free from all duties of a U.S. citizen, like paying taxes. The FBI considers the group's members a danger for making threats to judges and law enforcement, using fake currency and impersonating police officers.

The seven suspects have been charged in the shooting of Deputy Michael Scott Boyington, who survived. But authorities have said murder charges are pending.

The Federal Bureau of Investigation said it was investigating the killings but declined to comment Saturday and referred questions to the Louisiana State Police, the lead investigation agency.

Brian Smith was charged with attempted first-degree murder and the others with related charges.

Sovereign citizens are a loosely organized movement founded in the 1970s and more fully developed in the 1980s, according to the Anti-Defamation League website. Sovereign citizens believe that all levels of government have no jurisdiction over them and resist - sometimes with violence - authority including police, the website said.

They also like to use what is dubbed "paper terrorism." It involves using frivolous lawsuits and fake documents and of using genuine documents such as IRS forms to intimidate, harass and coerce public officials, law enforcement officers and private citizens.

Complete coverage of the Louisiana officer shooting case on Crimesider