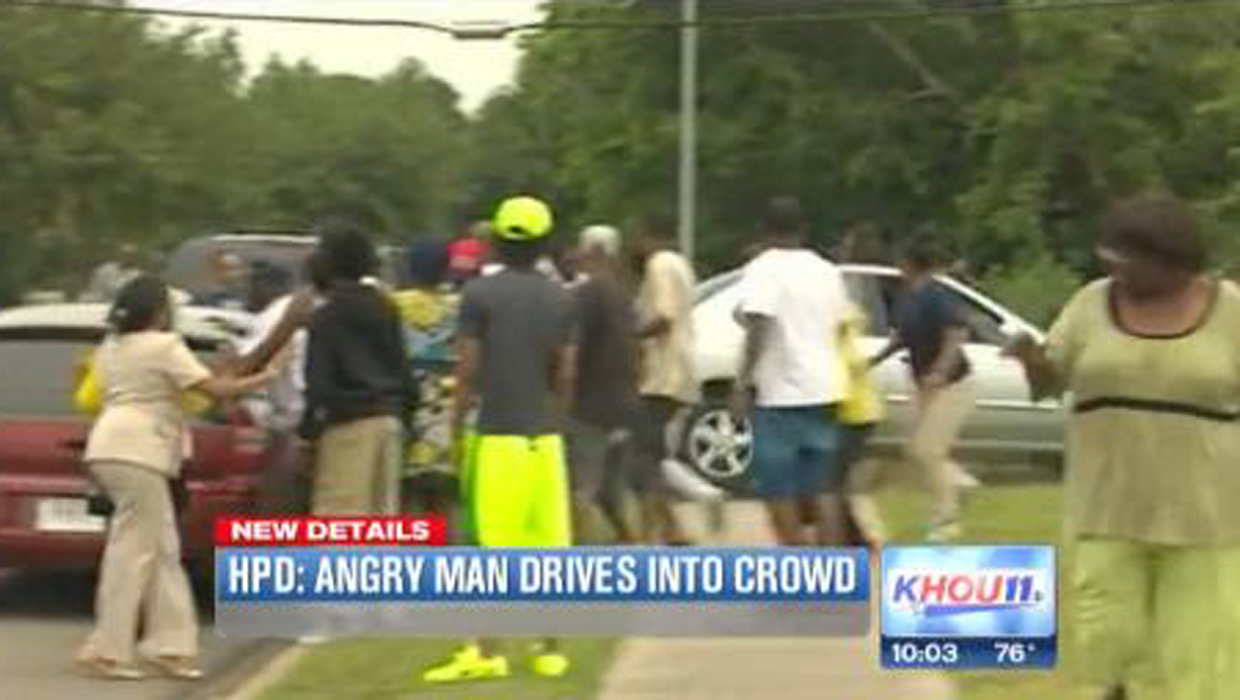 HOUSTON - After a man was fatally shot in Houston, the accused killer's father is in custody for driving his car through the crime scene where up to 100 people had gathered, reports CBS affiliate KHOU.

Twenty-year-old Demarkus Harrison was killed and another person was wounded after a shooting took place outside an apartment complex around 12:30 p.m. Wednesday. According to the station, neighbors said tensions had been rising between family members and friends of both the victim and the unnamed suspect throughout the day.

KHOU was at the scene of the crime when a car came plowing through the crowd. The station reports that nobody was injured and the driver was restrained by a Houston Police officer. Authorities have not identified the man behind the wheel, but KHOU reports that he is the accused shooter's father.

Deshonna Smith, who was in the passenger seat, identified the driver to KHOU as her fiancée, Lewis Bird Sr. "Why would I be in the car and let him do that?" Smith asked the station. She said the victim's family had been taunting Bird. "They came out here picking on him. This was self-defense." Video captured by the station shows a bicycle being hurled at the car moments before it drives into the crowd.

"That's when [Bird] got upset. The man threw the bicycle. Another man came and punched him in his face. That's when you seen the car go up in the median," Smith said. She can been seen on the video grabbing the wheel after her fiancée bailed out of the vehicle.

"We're lucky that nobody got hurt," HPD Officer Derrick Fontenot told the station.

The family of the victim said the violence was senseless. "The night before last, they came two blocks over and shot my house up," said Paul Callis, Harrison's grandfather.

Detectives have yet to apprehend the shooting suspect, according to KHOU, and investigators would not speculate on a motive for the crime. The man captured on video tossing the bike has also not been charged.

"The devil has taken over this whole apartment complex," said Smith. "This ain't nothing but Satan's playground."