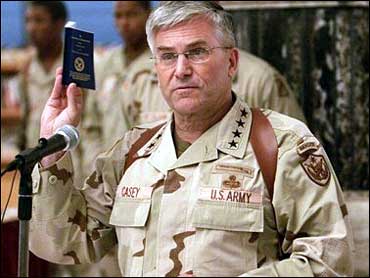 In Cairo, the family of Egypt's top envoy to Iraq, who was abducted over the weekend in Baghdad, pleaded for the diplomat's speedy release and said it had heard nothing of about his whereabouts. Ihab al-Sherif's abduction was an apparent bid to dissuade Arab governments from strengthening ties to the U.S.-backed government.

In the Iraqi capital, about 600 Iraqi army soldiers and 250 U.S. soldiers took part in Operation Muthana Strike, which started early Monday and targeted alleged insurgents safe houses in neighborhoods near the west side of the Baghdad International Airport, the military said in a statement.

At least 100 suspected insurgents, including alleged foreign fighters, were arrested, the military said. Those captured included Egyptian suspects, it said.

The raid, which the military said was based on tips from local residents, was designed to detain suspects, seize illegal weapons and gain intelligence to disrupt future attacks.

"The success of the Iraqi army demonstrates their level of training and high commitment to rid Iraq of terrorists," said U.S. Col. Kenneth Roberts in the statement. "I am proud of our Iraqi counterparts. They are well-led and well-trained. I congratulate them on their successful operation."

The operation concluded at about 9:30 a.m.

A joint U.S.-Iraqi patrol came under fire Sunday south of Baghdad, killing five Iraqi soldiers and wounding three, the U.S. military said Monday. There were no reports of American casualties. Up to 40 suspected insurgents were captured after the attack in Youssifiyah, 12 miles south of Baghdad.

On Sunday, officials and witnesses said al-Sherif, 51, chief of Egypt's diplomatic mission in Baghdad, was seized Saturday night by about eight gunmen after he stopped to buy a newspaper in western Baghdad.

Al-Sherif, who had been in the country since June 1, was pistol-whipped and forced into the trunk of a car as the assailants shouted that he was an "American spy," the witnesses said, speaking on condition of anonymity Sunday because they feared reprisals.

Al-Sherif's brother-in-law and family spokesman, Yahia Hussein, said Monday he has received no demands from the kidnappers nor the Egyptian Foreign Ministry, which has been in contact with Iraqi authorities. There has been no claim of responsibility.

"We know nothing at all. We don't know what the kidnappers want but I am sure the Foreign Ministry is exerting all the effort to let him free," Hussein said.

In Cairo, the Egyptian Foreign Ministry confirmed the diplomat was missing and said contacts were underway with the Iraqi government "and all other sides" to win his release.

"This kidnapping is an attempt to block Arab countries from opening stronger diplomatic channels in Iraq," said Iraqi legislator Abbas al-Bayati, a member of the foreign relations committee.

More than 1,400 people have been killed in insurgent attacks since Prime Minister Ibrahim al-Jaafari announced his new government, dominated by Shiites and Kurds, on April 28. Sunni Arabs make up the core of a violent insurgency.

Washington has been urging Arab nations to resume full diplomatic relations with the sovereign, elected Iraqi government, and al-Sherif's abduction appeared to serve as a warning against responding favorably to such overtures.

Last month, the Egyptian government said it would upgrade its mission in Iraq to full embassy status headed by an ambassador, which would have made al-Sherif the first Arab ambassador to Iraq's new government although the timing of the move was uncertain.

The abduction occurred hours before U.S. Attorney General Alberto Gonzales paid a surprise one-day visit to Iraq on Sunday, where he praised the country's commitment to democracy despite sustained and deadly attacks by insurgents.

He told U.S. troops and diplomats at the American Embassy that their mission in Iraq "is so very important to the security of our country and the promotion of freedom around the world. There is so much at stake here."