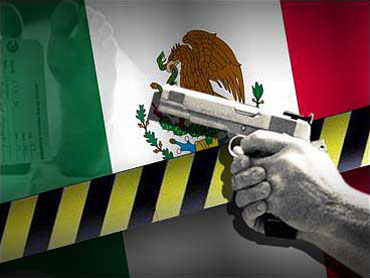 DALLAS - Three people suspected of smuggling guns to Mexico were arrested in a Dallas suburb on Monday after federal investigators traced the gun used in the killing of a U.S. agent in Mexico to one of them, officials said.

Agents of the U.S. Bureau of Alcohol, Tobacco, Firearms and Explosives arrested the suspected gun smugglers in morning raids in the southern Dallas suburb of Lancaster, Texas, ATF spokesman Tom Crowley said. Crowley referred questions on other details to the U.S. Justice Department in Washington. A department spokeswoman said no statement was planned for Monday.

The ATF said the gun was used in a Feb. 15 shooting of two federal agents who were driving on a highway near the northern city of San Luis Potosi on Feb. 15. U.S. Immigration and Customs Enforcement agent Jaime Zapata was killed and agent Victor Avila was wounded.

Zapata and Avila, who worked at the U.S. Embassy in Mexico City, were attacked as they returned to Mexico City from a meeting with other U.S. personnel in the state of San Luis Potosi. Avila was shot twice in the leg and is recovering in the United States.

Some reports at the time said the two were stopped at a roadblock, while others said they were run off the road by other vehicles. The Mexican government does not authorize U.S. law enforcement personnel to carry weapons.

Also Monday, the Mexican navy announced that marines had captured a regional boss for the Zetas drug gang that is accused in Zapata's slaying.

Navy spokesman Jose Luis Vergara said that suspect Sergio Antonio Mora oversaw Zeta activities in the state of San Luis Potosi. Vergara did not say if Mora was involved in the attack on Zapata and Avila, but he said that Mora, known as "El Toto," was the boss of Julian Zapata Espinoza, who was arrested last week and allegedly confessed that he took part in the shooting.

Mora and five other suspects, including a Honduran man, were detained Sunday at a hotel in Saltillo, capital of the northern state of Coahuila.

Much of northeastern Mexico has seen an increase in bloodshed as the Zetas battle their former allies in the Gulf cartel for control of drug trafficking and other criminal activity. Mexican authorities say Zapata Espinoza told them the two agents were attacked because they were mistaken for members of the rival cartel.

Last week, some U.S. officials said the attack was an intentional ambush of the agents and that the gunmen made comments before they fired indicating they knew who their targets were.

The agents were in a Chevrolet Suburban. Mexico's drug cartels frequently set up roadblocks and ambushes to steal large SUVs and pickups, vehicles they like to use.

Vergara said Mora also is suspected in the February killing of Manuel Farfan, a retired army general who recently had become police chief in Nuevo Laredo, the city across the border from Laredo, Texas.

Federal police on Sunday also detained another alleged Zetas member, Luis Miguel Rojo, 27, in San Luis Potosi state. They did not said if he played a role in the attack on the U.S. agents.