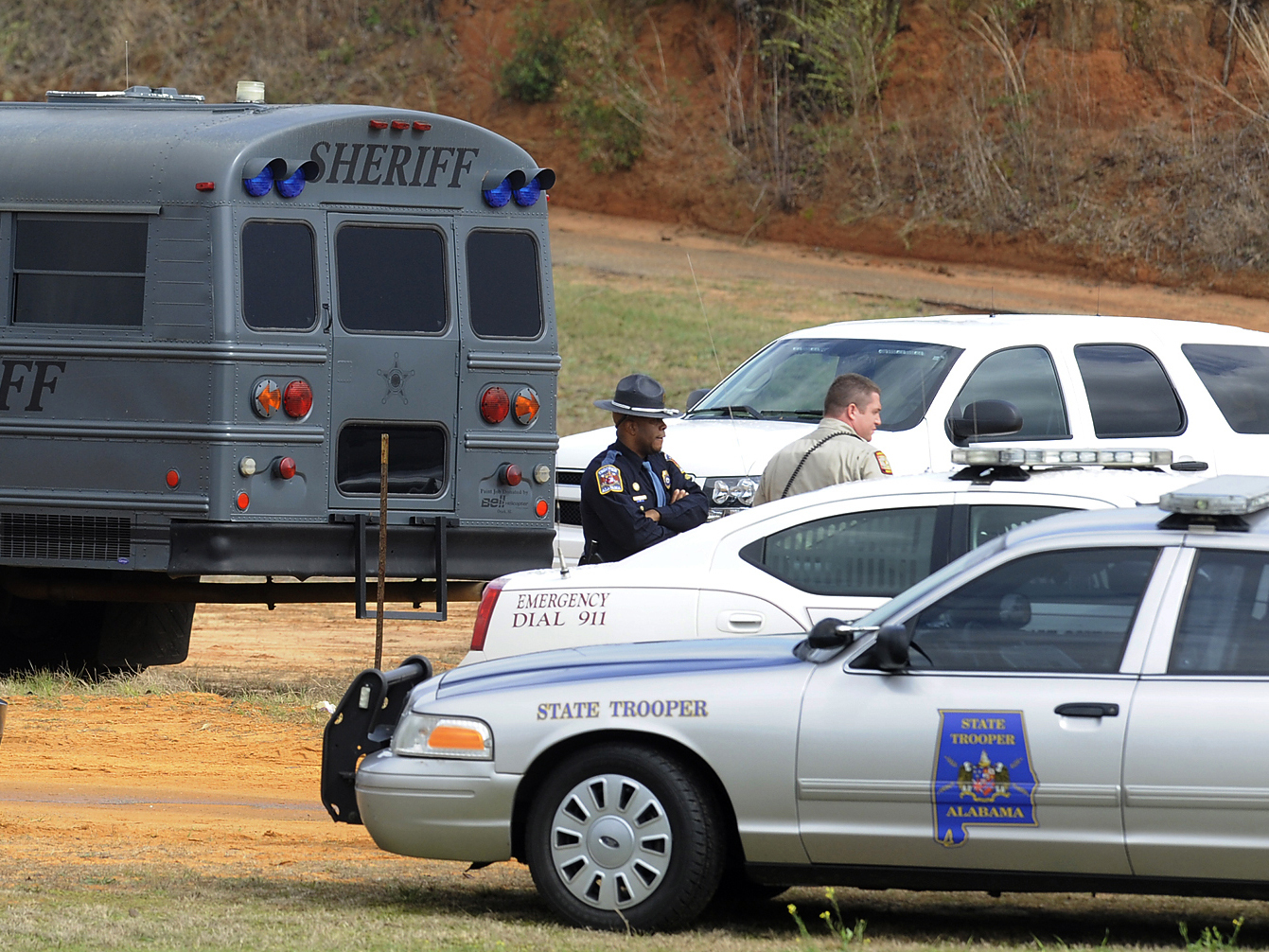 MIDLAND CITY, Ala. A gunman holed up in a bunker with a 6-year-old hostage kept law officers at bay Wednesday in an all-night, all-day standoff that began when he killed a school bus driver and dragged the boy away, authorities said.

SWAT teams took up positions around the gunman's rural property and police negotiators tried to win the kindergartener's safe release.

The gunman, reported to be a 65-year-old retired truck driver, was known around the neighborhood as a menacing figure who once beat a dog to death with a lead pipe, threatened to shoot children for setting foot on his property and patrolled his yard at night with a flashlight and a shotgun.

He had been scheduled to appear in court Wednesday morning to answer charges he shot at his neighbors in a dispute last month over a speed bump.

The standoff along a red dirt road began on Tuesday afternoon, after a gunman boarded a stopped school bus filled with children in the small town of Midland City, population 2,300. Sheriff Wally Olson said the man shot the bus driver when he refused to hand over a 6-year-old child. The gunman then took the kindergartener away.

"As far as we know there is no relation at all. He just wanted a child for a hostage situation," said Michael Senn, a church pastor who helped comfort the traumatized children after the attack.

CBS affiliate WTVY-TV in the nearby town of Dothan reports that contact has been made with the unidentified child and that the hostage is safe, but still being held captive. Police communicated with the boy through a PVC pipe in the bunker.

The bus driver, Charles Albert Poland Jr., 66, was hailed by locals as a hero who gave his life to protect 21 students.

The boy's classmates, their parents and other members of this small Bible Belt community gathered in several churches and held a candlelight vigil in the town square Wednesday evening to pray for Poland and for the boy's safety. Some in the square joined together to sing "Amazing Grace."

The suspect was believed to be holed up with the boy at his rural property in an underground bunker of the sort used to take shelter from a tornado. Authorities gave no details on the standoff as it dragged on through the night and into the afternoon Wednesday, and it was unclear if the suspect had made any demands.

About 50 vehicles from federal, state and local agencies were clustered at the end of a dirt road near where the suspect lived in a small travel trailer. Nearby homes were evacuated after authorities found what was believed to be a bomb on his property.

State Rep. Steve Clouse, who met with authorities and visited the boy's family, said the bunker had food and electricity, and the youngster was watching TV. He said law enforcement authorities were communicating with the gunman, but he had no details on how.

At one point, authorities lowered medicine into the bunker for the boy after his captor agreed to it, Clouse said. The lawmaker said he did not know what the medicine was for or whether it was urgently needed.

Mike and Patricia Smith, who live across the street from the suspect and whose two children were on the bus when the shooting happened, said their youngsters had a run-in with him about 10 months ago.

"My bulldogs got loose and went over there," Patricia Smith said. "The children went to get them. He threatened to shoot them if they came back."

"He's very paranoid," her husband said. "He goes around in his yard at night with a flashlight and shotgun."

"Everybody up the hill tried to avoid him," he said.

Patricia Smith said her children told her what happened on the bus: Two other children had just been dropped off and the Smith children were next. The suspect stepped onto the bus and grabbed the door so the driver couldn't close it. The suspect told the driver he wanted two boys, 6 to 8 years old, without saying why.

According to Smith, the suspect started down the aisle of the bus and the driver put his arm out to block him. The suspect fired four shots at Poland with a handgun, Smith said.

"He did give his life, saving children," Mike Smith said.

Patricia Smith said her daughter, a high school senior, began corralling the other children and headed for the back of the bus while the suspect and the driver were arguing. Later, Smith's son ran inside his house, telling his mother: "The crazy man across the street shot the bus driver and Mr. Poland won't wake up."

Patricia Smith ran over to the bus and saw the driver slumped over in his seat. Her daughter used another child's cellphone to call 911.

Another neighbor, Ronda Wilbur, said the suspect beat her 120-pound dog with a lead pipe for coming onto his side of the dirt road. The dog died a week later.

"He said his only regret was he didn't beat him to death all the way," Wilbur said. She called animal control, who came out and talked to the suspect, but nothing else happened. "If a man can kill a dog, and beat it with a lead pipe and brag about it, it's nothing until it's going to be people."

The suspect had been scheduled to appear in court Wednesday to face a charge of menacing some neighbors as they drove by his house weeks ago. Claudia Davis said he yelled and fired shots at her, her son and her baby grandson over damage the suspect claimed their pickup truck did to a makeshift speed bump in the dirt road. No one was hurt.