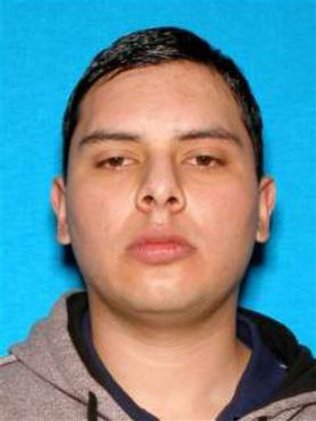 (CBS/AP) BILLINGS, Mont. - A shooting left three people dead at a rural residence on Montana's Crow Reservation and a manhunt was under way Tuesday for an armed suspect, prompting a lockdown of schools, a hospital and other public buildings, authorities said.

Authorities were searching for 22-year-old Sheldon Bernard Chase, who has a history of mental illness and is considered armed and extremely dangerous, said Eric Barnhart, FBI supervisor in Billings.

The killings took place in a remote area of the southeast Montana reservation, which is roughly 10 miles from the Wyoming border, local officials said. The victims' identities were not released and it was not immediately clear when they were killed but Barnhart said they were shot with a high-powered rifle.

Lodge Grass City Clerk Cody Not Afraid said those killed were an elderly woman, her granddaughter and the granddaughter's boyfriend. She said authorities were searching for a suspect in a white, four-door vehicle with North Dakota plates.

The two younger victims were in their 20s, said Not Afraid, who knew the victims' families. She said they lived along Lodge Grass Creek Road about 10 miles outside of Lodge Grass, a city of about 500 people.

Not Afraid said she did not know what led to the shootings.

Chase was described as 6'2", with brown hair and brown eyes and weighing 230 pounds. The FBI said he may be driving a Toyota Corolla or Celica with South Dakota license plates. Chase also may be driving a 2000 red, 4-door Volkswagen Jetta with expired Montana license plate number 2210861, FBI spokeswoman Deborah Bertram said.

Anyone who sees Chase is asked not to approach him but instead call law enforcement. Meanwhile, authorities throughout the state, as well as in Wyoming, North Dakota and South Dakota have been notified of the manhunt.