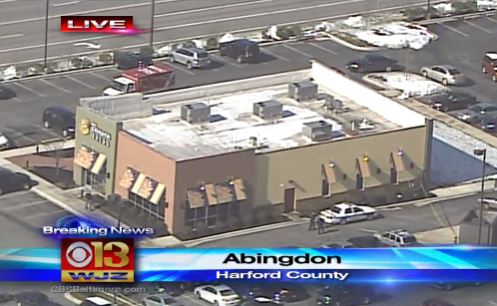 ABINGDON, Md. -- - Two sheriff's deputies have died from their wounds after a gunman opened fire in a restaurant, near a shopping center in Maryland, the sheriff says.

A man shot a sheriff's deputy in the head inside a crowded restaurant at lunchtime Wednesday during a shootout, authorities and witnesses previously said.

The gunman was killed and, remarkably no bystanders were hurt, Harford County Sheriff Jeffrey Gahler said.

CBS Baltimore reports that the suspect has been identified as 67-year-old David Evans. Police say Evans had several warrants out for his arrest.

Both deputies were men. One served 16 years, and the other for 30. Their names have not yet been released, CBS Baltimore reports.

The first shooting took place inside a Panera restaurant in a shopping center in Abingdon, which is about 20 miles northeast of Baltimore.

It's not yet known what led to the shooting but the sheriff doesn't believe that there is a threat to the community or any other people involved in the shooting, reports CBS Baltimore.

Sophia Faulkner, 15, said she and her mother were getting lunch and almost sat right next to the gunman. Instead, they chose a booth about 10 feet away because the man appeared "sketchy" and disheveled. He was sitting in the back and hadn't ordered any food, Faulker and her mother said.

A sheriff's deputy was called to the restaurant after a report about someone causing a problem. The deputy tried to talk to the man, who was apparently known to workers. The deputy sat down beside him, asked how he was doing and the man shot him in the head.

"I saw him fall back out of his chair and the blood started coming out," Faulkner said. "I didn't know how to process it. My mom said, 'What's going on?' and I said, 'Get down, someone just got shot.'"

She said "everyone started screaming" after the gunshot and children -- out of school because of snowfall - were running around.

"I was freaking out so much and everybody was running to one side of the store. Families were huddling together. I didn't really know what was going on," she said. "You see this stuff online and in movies and on TV when it happens, but you never think you're going to go out to lunch one day with your mom and it's just going to happen."

The gunman fled and witnesses gave officers a description and the direction he was headed, the sheriff said. After at least one deputy caught up with him, shots were exchanged, leaving the second deputy wounded and the suspect dead, the sheriff said.

"I saw two women and a child run from Panera to our back door. They were hysterical. They said they heard gunshots," said bartender Mike Davis, who was working at the Ocean City Brewing Co.'s Taphouse. "We locked the door and went to talk to a cop. The cop said not to let anyone in. Then, we heard more gunshots, 'Pop, pop, pop, pop,' from down in the shopping center. It was hectic."

The sheriff said investigators believe the person acted alone and there is no further threat to the community.

"The restaurant was very full at lunchtime," Gahler said. "Thankfully, no one else was injured."

The shopping center is called the Boulevard at Box Hill. It has a mix of shops, restaurants, a grocery store and a bank.

Yellow tape blocked off the Panera and Taphouse restaurants, but people were coming and going freely at other businesses after the shooting.

Governor Larry Hogan issued a statement in response to the deaths of the deputies. He has ordered the flags to be flown at half-staff.

"Anytime law enforcement or first responders lose their lives in the line of duty, it is a tragedy and today's violence in Abingdon and the deaths of two Harford County sheriff's deputies is nothing less than absolutely heartbreaking," he said. "Our administration is committed to assisting Harford County during this investigation, and the Maryland State Police are working closely with local law enforcement to provide support as needed."