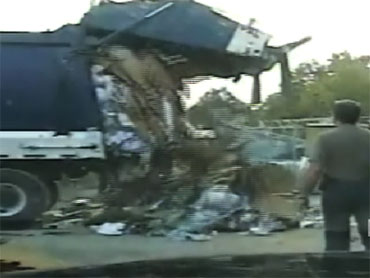 An alleged crook running from police needed a place to hide.

James Brienzo saw a dumpster and leaped into it, authorities in Alliance, Ohio say.

But, reports Paul Joncich, of CBS Cleveland affiliate WOIO, there was one problem: It was trash day, and collectors were about to make a pick.

Minutes later, Brienzo was scooped up and dumped in the back of a garbage truck.

While swimming in garbage, he fished out his cell phone and called a friend, who called police.

"He is in the trash truck. He said it compacted him once and is getting ready to again," a police dispatcher said.

Police had to electronically track the cell phone to find the right garbage truck.

But, says Joncich, Brienzo was so wedged in the only way to get him out -- was to empty the compressed trash.

Brienzo fell to the ground, amid the trash, head-first.

Another Alliance officer says Brienzo "was in a lot of pain. He had been compacted several times. He was begging us to empty the truck."

He was listed in critical condition in an area hospital.

Erica Hill told the story on "The Early Show":