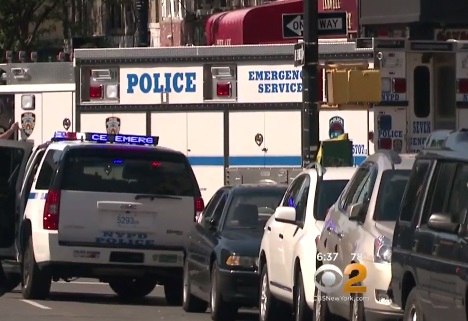 NEW YORK -- A suspect is dead in a police-involved shooting in Brooklyn, CBS New York reported.

Police told CBS New York there was a burglary at 2271 78th St. around 6:45 p.m in the Gravesend section of Brooklyn.

NYPD's Chief of Department James O'Neill said during a press conference that the suspect was confronted by a sergeant after scaling a fence.

The suspect was pronounced dead at Coney Island Hospital.

Police said they recovered a revolver at the scene.

Police are looking for a second suspect -- a heavy-set black male who was wearing a yellow construction hat.

Seven adults and infant who were in the home at the time of the burglary were not hurt.

There were no injuries to officers.

This is the second police-involved shooting in Brooklyn in recent days.

On Sunday, police said a man pointed a gun at officers in the Prospect-Lefferts Gardens section of Brooklyn, leaving the suspect with non-life threatening injuries.