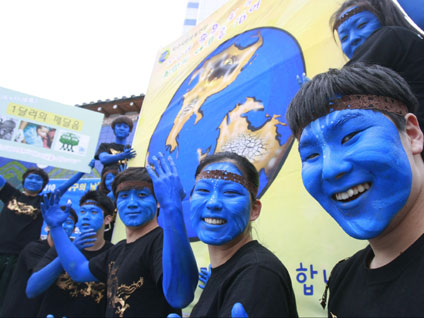 If you want to be a fashion designer, the Magic fashion show in Las Vegas is the first big stop, reports CBS Early Show correspondent Tracy Smith. More than 3,000 clothing and accessory makers gather twice a year to show their stuff to stores from all over the world.

It's where "Survivor" alumna Christa Hastie is making her debut.

Christa showed her flair for fashion on "Survivor: Pearl Islands." Now, other cast members from the reality TV show are helping Christa launch her new line of clothing: Christa Hilda. Jenna Morasca used her experience as a professional model; Rupert Boneham was the MC.

He says he had some fun mastering the fashion terms. "They could have given me a script in Greek, I would have done just as good," Rupert tells The Early Show co-anchor Hannah Storm.

"It's just friends trying to help friends," says Christa. "We're all in the same boat, trying to get ourselves out there. I mean, we're not movie stars, we're not TV stars. We were just on a show together, and this is my career now."

Christa, for her part, has also been helping Rupert. "She is now my webmaster on Rupert's Kids," he says.

Christa says it is overwhelming to show her clothes with 3,000 other designers. "You walk through the aisles - there are some great designers out here. But I have great stuff, too!" she says.

The competition to create a successful clothing line can be even more intense than surviving with a handful of strangers on some remote tropical island.

Montesano says, "There's a lot that goes into it. It's not just a glory business."

Pearlman has this advice for young designers. "Make great products. Forget about everything else, but if you're into great product, as Gene always says, the money will come; the success will come. It's about the product."

Rupert's product is not clothes but his chariyty for children. It was a long dream for Rupert to get his charity started. Winning the game made it a reality.

"On Sept. 14, we're launching Rupert Kids in Indianapolis and we're taking kids out of the system and bringing them into our family and into other people's families and showing them a different way," Rupert says.

The million dollars he won as the viewers' choice winner of "Survivor: All Stars" is gone. What did he do with it?

"Starting my kids group. Setting up my daughter with her college fund so no matter what happens to me she's going to be taken care of. Taking care of my mom. Getting our bills paid off, getting a new house, and paying the government; it's gone! Over a million dollars," he exclaims.

Life is good for Rupert; Like Christa, he has a new career. He did the voiceover on the "Survivor: All Stars" DVD, which includes new footage from the show. The DVD also comes out on Sept. 14. Plus Rupert has a new cartoon coming out: "Roly in the Country with Blue," which follows the life and times of a polar bear named Roly and snail named Blue.

It is "A new Australian animation and I'm the voice of the cartoon," Rupert says. Besides that he has been doing the new commercials for "Survivor: Vanuatu: Islands of Fire," which of course promises "a new twist."

So far, Rupert says the contestants who stand out are Scout Cloud Lee and Dolly Neely.

About Lee, he says, "If she can be the mamma without being too mamma, that is always a good role." As for Neely, he notes, "The rugged rancher type with that cutesy look is a great combination, too."