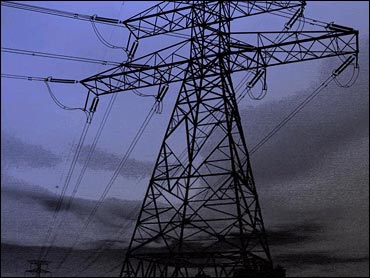 "Survivor" and similar television shows are popular because there are so few ways in modern society for people to test themselves that they feel they have to do it vicariously. We all wonder how we would hold up in a crisis. Would we be one of the survivors on a journey to the North Pole, interrupted by an avalanche? Would we run back into a burning building to get our elderly neighbor's beloved photographs? Would we get back on our surfboard after a shark has taken a chunk out of our arm? I no longer have to ask myself these questions. My mettle has been tested. I survived 15 hours of no television, no computer, and, yes, no microwave.

I'm still not sure what caused the power failure in our neighborhood. It wasn't particularly windy, and it wasn't raining. Although, here in Southern California, if there are two drops of rain, our entire infrastructure falls apart. So it's possible that the outage was the dew's doing.

Our electricity and phones went dead last Monday at 1:17 PM. Almost immediately, I was called on to rescue somebody. The guy had been doing some work in our backyard, and couldn't get out because the electric driveway gate wouldn't work. I didn't let him panic. Thinking only of him, and risking scraping my knuckles on various tools in our drawer, I found the appropriate Allen wrench, and manually opened the gate for him. He embraced his freedom. He could join his friends and co-workers. I, of course, was left to face the elements alone.

I couldn't work at my computer, so I took a deep breath, and then I looked Fear in the eye, and I didn't blink – I would tackle the adventure of cleaning and organizing my office. I threw away mountains of papers, old files, and magazines. I put books where they belonged. I ignored my sweat and my tensing muscles, knowing how good I'd feel when the task was finished. I dusted, I straightened, and I leaned photographs up against the wall where I wanted them to be. (I'll get around to actually nailing up hooks for them during the next power outage).

When my wife got home, we decided to go to an early movie. This, too, was a test of Herculean proportions for both of us -- we sat through the entire new Adam Sandler movie.

Then we went out to dinner. Many of the others in the restaurant were probably soft-bellied techno-dependos who couldn't go for an hour without checking their phone messages. I, on the other hand, had the hearty soup and the earthy salad.

When we got home, our son was in the living room, his schoolbooks and a flashlight at his side. I smiled, proud of my firstborn's resourcefulness. And the more I thought about it, I realized that it was quite possible that he had actually studied more than he would have if there had been electricity. He couldn't watch TV or e-mail his friends. What was left for him to do but study?

This wasn't the only way that the power failure was a blessing. While I realize that major power outages can be tragedies for people and disasters for cities, a minor one isn't bad at all. I recommend your taking advantage of it the next time you have one. Being without power was empowering. It was very quiet, very peaceful. We talked, we read, I wrote longhand on a yellow pad. My wife and I probably wouldn't have had a nice evening out if it weren't for the outage. And my office hasn't looked this good in years.

At around 11:00 that night, I took the dog out for a walk -- with my trusty flashlight. As I stood on our darkened block for a moment, my loyal canine at my side, I was proud that I was able to live "off the grid." Then I noticed almost every house had a car parked in front of its garage. Obviously, these people could not use their electric garage door openers because there was no electricity. I knew they could probably open all of their garage doors manually, but apparently, they weren't aware of this little trick. I guess some people are survivalists, and some aren't.