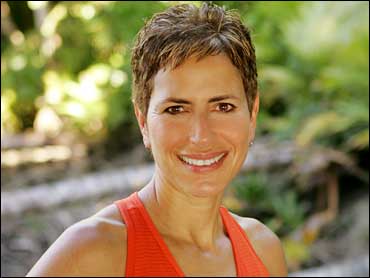 The ladies had their chance to shine on the 13th episode of "Survivor: Palau." They blew it.

Caryn Groedel, the 46-year-old civil rights attorney, was the tribal matriarch. Formerly. Despite her best efforts to keep an alliance with her fellow 40-something Tom and keep the young things under her wing, tribal council brought a shock for Caryn.

"Everyone has been very deceptive," Caryn said, post-torch snuff.

But with only five Survivors left, it wasn't a huge surprise for anyone but her, because alliances shifted with a turn of the dime. Take Jenn Lyon, for example. She was burnt toast after her buddy Gregg Carey got ambushed last episode.

"I had no idea. I was completely blown away," Jenn said, making sure to add that she was emotionally lonely without him (especially at night).

But back at camp, the California blondie kept a poker face.

But he admitted that having voted off the third male-wheel did pose some fresh threats to he and Tom Westman: "The only thing I'm worried about now is the three girls turning on Tom and me. If we can avoid it now in the next 24 hours, we're money."

Down to five, the tribe's strategizing eclipsed all daily considerations. Allegiances flip-flopped. A lot of long, thoughtful walks on the beach occurred.

But somehow, every moment of drama included Katie Gallagher. The Katie saga started with the reward challenge.

In it, the five competed with traditional Palauan flat rafts to retrieve bags from poles in the water. This almost instantly emerged as a battle of the men, Ian trying to paddle faster than Tom, far ahead of the ladies. Jenn showed her mastery of the single pole-paddle, but lagged too far behind to stand a chance.

Perhaps the testosterone was at full steam: At stake was not only a trip to a Palau mansion, stocked with barbecue and modern amenities, but also a brand new red convertible.

Ian docked his raft first and won the challenge. Here's the delicate part: The teammembers anticipated that the winner would be able to invite a guest along. Tom and Ian deftly realized the strangling power a three-way woman alliance, which they foresaw if they made what would seem to be a natural choice to bring their fellow man along if either won the challenge. So they decided against it.

Then when Ian sat down in his brand new car, he couldn't help himself. He chose Tom.

You almost had to forgive him; a red convertible and an oceanside drive for the guys. Once at the hilltop home, with beers in hand, the worried look might have vanished from Tom's face. But it hadn't.

"This is the best place to have a party in the entire world," Ian said, totally relaxed, gazing off the balcony of the Palau mountain house he and Tom shared for a beer and barbeque. Little did he know that he left a wounded mockingbird on the beach.

Katie felt horribly betrayed. She sobbed to Jenn and Caryn the rest of the afternoon. And then she spilled her guts. She let out every bit of alliance she ever had with the guys. Jenn said she didn't realize Katie had all that strategy in her. The other ladies spilled their guts in return, and then they slept on it.

A female alliance was born.

Ian upon returning to camp, Katie spat on Ian with the silent treatment. The other women blew off Ian and Tom, too.

"It was like some horrible, horrible nightmare," Ian said.

"This is like classic girl," Ian said. "Girl turns her back on you."

So he tried his best to get her alone. Finally submitting to a walk on the beach, Katie verbally beat down the dolphin trainer. "You promised you'd never lie to me, and now I can't trust you!" Katie cried.

Ian cried. He begged. He got on his knees.

Not long after Ian wept for Katie, Tom bombarded her in a last-ditch effort to shatter the female alliance. He took the complete opposite approach, though, stone cold. He brought out the strongarm.

"It's Survivor, not Parcheesi," Ian said, describing Tom's new strategy. Appropriate, considering the next challenge — for immunity — involved navigating a tough obstacle course and then playing a board game of memory.

This, ostensibly, would give the women a more even-keel shot than during the last challenge.

Caryn let her heart rip at tribal council in front of the jury. Then all the sparks flew. More talking occurred than in any past tribal council, aside from perhaps the cat-bonding episode when Janu forfeited her candidacy in order to keep Steph in the game.

Regardless, it seemed to come down to Katie deciding whether to vote with the men or the women. When viewers saw girly scrolls and the name "Caryn" written on a ballot host Jeff Probst, the end was clear.

"Sorry to be the bearer of bad news, but too bad," Caryn said of her final tribal council rant. "All that stuff happened."

For more bad news for the final four Survivors, tune in to Friday's The Early Show.

Putting Infomercial Products to the Test