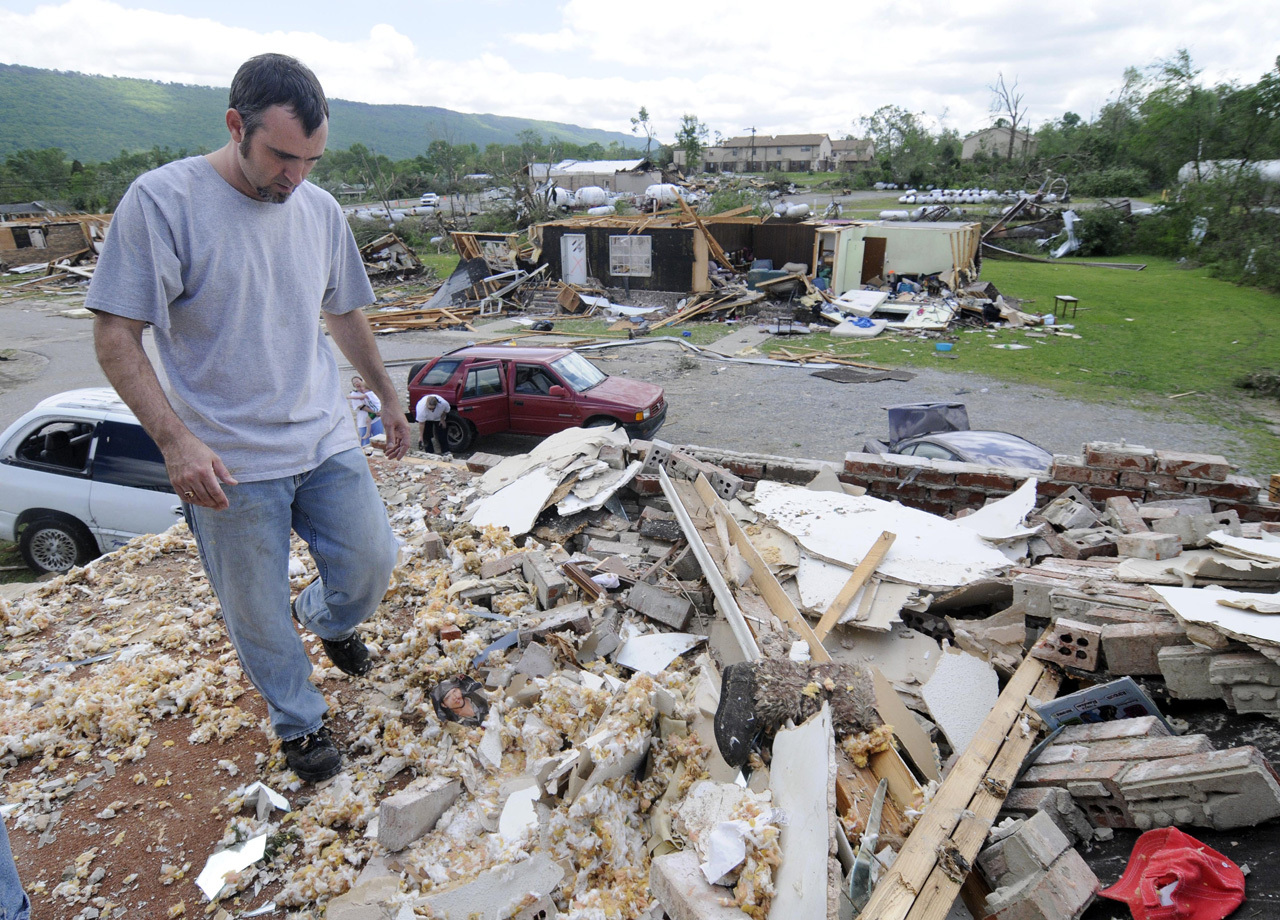 TRENTON, Ga. - A Georgia salon owner and her two daughters — Sky and Stormy — climbed inside a tanning bed while a tornado ripped the roof off their business. A Virginia couple scrambled under their garage's wooden steps after a twister ripped off their home's roof. Mississippi mobile home park residents found shelter in a Baptist church, clinging to one another as the building disintegrated.

Those who escaped the twisters that killed nearly 300 across six states hid in bathrooms, cramped closets, under porches and even in a car entombed by a collapsing basement garage. Many tell tales of having just minutes or mere seconds to make life-and-death decisions.

University of Alabama student Shaylyndrea Jones rode out a monstrous tornado in the hallway of a second-floor apartment that shook violently as whole city blocks of Tuscaloosa were chewed up.

"We were saying our prayers as it was coming down the street. There was a rumbling and this loud woosh," she said. At least 36 were killed in the college town.

For 30 seconds, wind rushed around the bed and debris flew.

"Then it just stopped. It got real quiet. We waited a few minutes and then opened up the bed and we saw daylight," she said.

In Glade Springs, Va., 69-year-old Shelby Lester says the sky had a funny yellow tint and she told her husband, Fred, "There's a tornado coming."

They ran to a small bathroom.

"We just started praying," Lester said. "The house was swaying."

Truck driver Tom Rose was left shaking his head Thursday when recalling how the night before his tractor-trailer was blown off the road as he drove on Interstate 75 North in Ringgold, Ga., near the Tennessee line.

The 58-year-old was hauling a load of bleach and talking with his wife on his cellphone when he knew he was in "deep trouble" and hit the brakes.

Jerry Stewart, a 63-year-old retired firefighter of suburban Birmingham survived under his front porch with his wife, daughter and two grandchildren.

"They said the storm was in Tuscaloosa and it would be here in 15 minutes," he said. "And before I knew it, it was here."

Stewart pulled the bodies of two neighbors from the rubble of a home ripped off its foundation.

Teacher Victoria Mattox, 29, was asleep in Barnesville, Ga., when a friend texted her at 12:42 a.m. Thursday telling her the sirens were going off in town. She leapt from bed and made it to her closet just in time.

Seconds later she could feel her house shaking under battering winds. Windows popped out in the adjoining bedroom and then the ceiling peeled off above her head.

Within seconds, it was over and the closet where she had hunkered down was the only part of the house left standing, a large tree uprooted and arched over it. As she sorted through wreckage Thursday with the help of her parents, who drove down from near Knoxville, Tenn., and friends, she got emotional.

"I had called my father, and I just told him I loved him and I was going to die because I didn't think I was going to make it," she said, tears welling up in her eyes.

Others saw the storm coming. On the top floor of a Tuscaloosa hospital, chief nurse Patrice Jones found a big crowd gathered at the 7th-floor waiting-room window, transfixed by the approaching tornado.

Jones and other staff swiftly rolled patients on beds and wheelchairs into the halls, away from the windows. Fortunately, the twister veered away and the hospital only lost a few windows.

Others recalled even more harrowing moments.

"It was a nightmare. We hunkered down in a bathroom and saw it rising over our house," said David Newton, a deputy sheriff in Jefferson County, Ala. "It looked like a big cloud with fast moving debris. The next thing you know it was on top of us."

He clutched the bathroom's heater vent, his wife clinging to his arm, holding on for their lives.

"If I didn't hold on, I would have gone away with the storm," he said.

Even weather forecasters had to hunker down.

In Huntsville, Ala., meteorologists found shelter in a reinforced steel room, turning over monitoring duties to a sister office in Jackson, Miss.

"We have to take shelter just like the rest of the people," said meteorologist Chelly Amin, who wasn't at the office at the time but spoke with colleagues later.

In Ringgold, Ga., McDonald's employees huddled in the metal cooler to escape a storm that sent a white van into the building's side.

Down the street, rescuers had to dig out four people with minor injuries, stuck inside the bathroom of a BP gas station. Several people died in the town and nearby.

They went into sturdy section of the church where they hung onto one another and anything they could grab onto as the building began crumbling away, Pastor Wes White said.

A red Jeep was pushed on its side inside the church office and the second story was gone. Walls collapsed. But he immediately noticed that something was untouched.

"Our choir robes are OK," the pastor shouted. "They're perfectly white."

A Louisiana police officer was killed Wednesday morning when a towering sweetgum tree fell onto his tent as he shielded the 9-year-old with his body, said National Park Service ranger Kim Korthuis.

The girl was brought to a motor home about 100 feet away where campsite volunteer Greg Maier was staying with his wife. He went back to check and found Covington Police Lt. Wade Sharp's body.