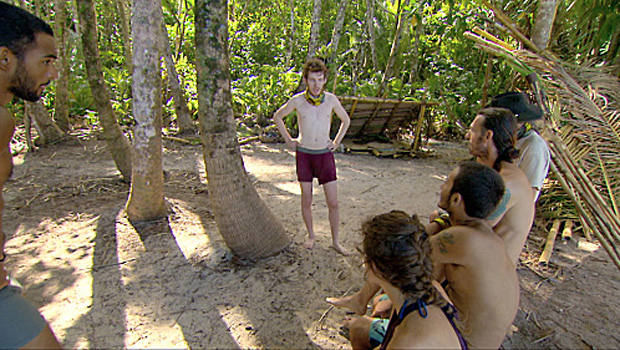 (CBS) "Survivor: South Pacific" returned with a lot of twists and turns after a Thanksgiving-week break. Episode 12 found one tribemate making a big gesture to a fellow castaway, and of course, lots of castaways turning on one another.

The seven remaining tribe members return to camp. Harvard law student, Cochran, kicked things off by asking Te Tuna Tribe to save him, telling the members that they're indebted to him. But not everyone, including Sophie, felt that way.

First stop? Redemption Island where Ozzy, Dawn and Whitney must balance ceramic dishes on the end of a long rod. If the dishes fall, they're out of the duel. One slight move (a yawn, in fact) cost Dawn the game. Shortly after that, Whitney lost her stack and she's kicked off with Dawn and headed to the "Survivor" jury.

Dawn told host Jeff Probst that the one thing "Survivor" has taught her is that that "anything is possible." The adventure is over, "but I got to take it," she said before walking off.

Ozzy, meanwhile, has his own plan. "This is my home -- Redemption Island," he said.

Back at camp, Edna, the anesthesiologist, and Rick blasted Albert (aka "Prince Albert," according to Rick) for not doing his share of work.

Meanwhile, Edna, looking eerily thin, was worried that she might be the next to go after Cochran.

It's déjà-vu for the Immunity Challenge. The gang must toss sandbags on top of crates. The first three who do, move to the next round: hitting a slingshot at a target.

The winner gets immunity and a reward: a "spa afternoon" featuring a shower and a massage. Sophie, Albert and Rick move to the final round of the challenge, but in the end, Albert won the Immunity and and also got the chance to choose a castaway to also take part in the spa reward.

Albert chose Coach, and then surprised everyone by giving up his own massage to Cochran because his birthday was coming up in two days. But Cochran was suspicious of Albert's motives.

The alliance shifting attempts begin when Cochran and Edna try to get Coach to vote Rick off the island.

The episode wrapped with Brandon breaking down in tears during the tribal council. "Anything worth having is not going to be easy," Brandon said.

Despite moves to vote Rick off, it was Cochran who was sent packing this week. He'll join Ozzy at Redemption Island. Until next week.

Tell us: Were you surprised to see Cochran go?