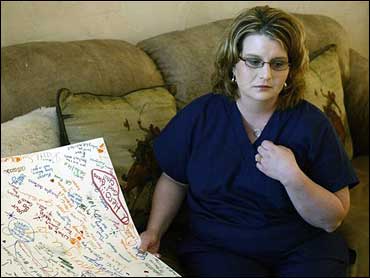 Edna Briant remembers lying on concrete, praying that her back wasn't broken, screaming for someone to rescue her 84-year-old sister from the burning bus that carried them and dozens of other nursing home patients away from the predicted path of Hurricane Rita.

"I said, 'Get Claire!" said Briant, 87, a deep purple bruise evident on her left arm as she pointed to her sister. The two sat in side-by-side wheelchairs Sunday in a neat Dallas nursing home room, their calm smiles giving no hint of the harrowing month they had just survived.

The sisters were evacuated from New Orleans during Hurricane Katrina. On Friday, they were hustled from Houston amid gridlocked traffic as frantic Texans fled the coastal region. But before they got to Dallas, the pair survived a fire aboard a bus that left 23 people dead.

Briant, seated two rows behind the driver, said the group was on the bus for more than 15 hours when it "made a funny noise." The bus had already stopped once to fix a blown out tire, causing "some mumbling and grumbling" among passengers.

When the bus stopped a second time, the driver looked concerned, she said.

"All of a sudden, he got out of the chair and he pushed my legs over and he's looking underneath" to the floor of the bus, she said.

The driver checked outside the vehicle and apparently noticed a problem, perhaps seeing flames or smoke. He briefly conferred with aides and yelled for passengers to get off the bus.

"I said, 'You know I can't walk!"' Briant said. An aide rescued her by throwing her "on her shoulder or something," quickly putting her down on the ground, and going back for more people.

Her sister later joined her on the roadside, along with several others dragged from the burning vehicle, Briant said. A series of explosions, at least some caused by the passengers' oxygen tanks, fueled more intense flames, authorities said.

Tina Jones, a nurse at Baylor University Medical Center, was on her way to work around dawn when she noticed black smoke billowing from a bus ahead of her on Interstate 45 just south of Dallas.

The bus moved over to the shoulder. That's when the first explosion happened, rocking Jones' minivan. At first, she thought she had been rear-ended. Then, the second blast came and fire erupted from the bus.

"The flames were just horrific. They were huge, especially it being so dark," Jones said.

Jones looked out her car window and saw a police officer. She yelled that she was a nurse, and the officer waved her through traffic.

Two off-duty paramedics who also passed the bus were already tending those who had escaped. Jones then noticed an elderly man lying on the pavement and sobbing, calling for his wife, who died in the fire.

Jones also recalled trying to comfort a 101-year-old woman who survived probably because she was moved during the trip to an aisle seat near the back of the bus, where people were rescued first. Someone who took her previous seat died.

The woman told Jones, "'You know she died, and I don't know how to feel.' She was really struggling with that."

Then there was a woman who broke down and cried only after Jones loaned the woman her cell phone so she could talk to her son.

Jones later noticed the driver and went over to him. "He didn't say anything," she said. "He didn't cry. He just had this look of shock on his face."

The bus, run by Global Limo of McAllen, Texas, was taken out of service in July after its registration expired. It was allowed back on the road because of a waiver signed last week by Gov. Rick Perry intended to make available as many commercial vehicles as possible for the hurricane evacuation.

Authorities on Sunday said 23 people perished in the fire, down from earlier estimates that 24 passengers died.

Investigators with the National Transportation Safety Board arrived in Dallas over the weekend to begin sifting through the wreckage. NTSB spokesman Keith Holloway said the cause of the accident might not be known for a year or longer.

According to Federal Motor Carrier Safety Administration records, drivers for Global had been ordered to stop driving five times in the last three years, mostly for infractions regarding bus logs. In 2004, the company was rated as "satisfactory," with no evidence of major safety problems in recent years, records show.

Johnny Ray Partain, a former Global investor who has fought a legal battle with its owner for several years, said he has driven four of the company's buses and warned a court in May that the vehicles were poorly maintained and dangerous.

"I was complaining about the brakes," Partain said Sunday. "My attorney asked me if those buses are dangerous, and I said, 'Yes, somebody's going to get killed."'

Partain said Global has lost its business charter twice within the past 16 months for failing to pay state franchise taxes and does not pay its drivers very much. The company also filed for bankruptcy in February.

A man who answered the phone at Global's offices denied that Partain ever worked for the company. He referred all other questions to San Antonio attorney Mark Cooper, who declined to comment on the company's finances or bus-safety records.

The company had contracts with schools to drive students to athletic events but made most of its money driving seniors to gambling spots such as Las Vegas, Partain said.