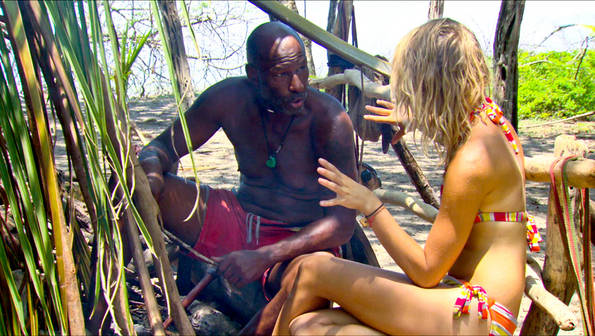 (CBS) Redemption Island is back in play this week, though how many - and when - ousted players will get back in the game is still a mystery on "Survivor: Redemption Island." (SPOILER ALERT)

Wednesday night's episode began with the duel there, although, thanks to a double Tribal Council last week, it was a three-way challenge. David lost and was sent out of the game, to become the first member of the jury.

That means two others - Matt, who has survived all the island duels this season, and Michael - go back into exile to await a new challenger. At the end of the episode, Julie was sent to join them.

Most of the episode revolved around the blowout between former NFL player Steve and former federal agent Philip. When a discussion over rice turned heated, Philip took offense at Steve's tone and words, calling them demeaning and racist.

A lot of discussion at camp and at Tribal Council revolved around what tribe members and host Jeff Probst referred to as "the N word." Steve never used that word, but Philip did in equating Steve's comments to use of the epithet.

Usually given to aimless ranting and stories without a point, Philip managed to coherently explain his feelings at Tribal Council as evidenced by nods from tribe mates and comments from Probst.

The former Ometepe tribe, with Boston Rob still calling the shots, turned down a chance to get rid of Philip, who has been a nagging presence at their camp since the game started. All three former Zapatera members loudly announced they were voting to oust Philip and Ometepe had to provide just two votes and he was gone.

Viewers were led to believe Rob was tempted but he made what appears, at this stage of the game, to be the wiser choice. After all, who better to be seated next to at final Tribal Council than Philip?

As the former Zapateras are whittled away (only Steve and Ralph are left), how will the Ometepes jockey for position? Tell us in the comments and take our poll on who will in the $1 million this season.