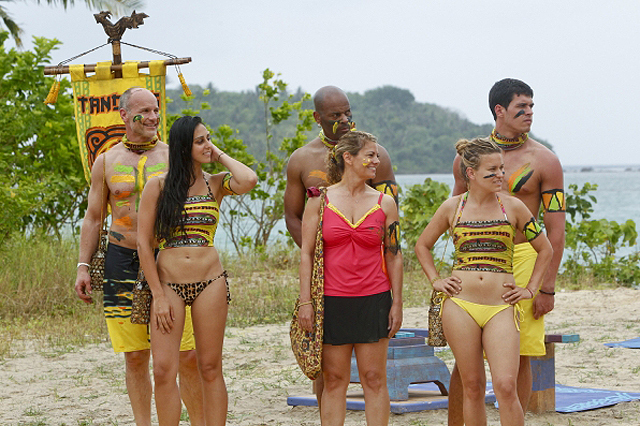 (CBS News) Only hours after they arrived at their jungle campfires Wednesday night, the 18 new castaways for "Survivor: Philippines" began scheming, lying and backstabbing.

In a 90-minute premiere, the reality show with 24 seasons under its belt introduced three tribes, each led by a person who had been removed for medial reasons from a presvious "Survivor" adventure: Michael Skupin of "Australia Outback," Russell Swan of "Samoa" and Jonathan Penner of "Cook Islands" and "Micronesia."

Not surprisingly, all three started with targets on their backs. What was surprising was they seemed to deserve it, based on scenes shown on air. Swan barked out orders like a drill sergeant, an accident-prone Skupin kept dabbing at blood from assorted cuts and scrapes and Penner, while espousing a team ethic, kept sneaking off alone to hunt for the hidden immunity idol.

Also not surprising was that the two "celebrities" on the team - former baseball player Jeff Kent and child actress Lisa Whelchel - wanted to fly under the radar. Neither did. A baseball fan on his team recognized Kent and Skupin remembered Whelchel from her "Facts of Life" days. So far, neither has shared the discovery with the others.

But they may not have to. Each showed weaknesses in the first episode that could send them home before everyone in the game knew who they were. The 44-year-old National League MVP hurt his knee in the opening moments of the game as he and his tribe mates were rafting to their campsite. While he tried to hide the injury from others, cameras caught him limping when he was alone.

Whelchel, 49, was having trouble bonding with her much younger tribe mates - so much so that Skupin tried to persuade her to tell them about her past so that they would warm up to her better.

Of the other castaways, none seemed to distinguish himself or herself at the outset, either by hint of prowess or personality. The most interesting was Zane Knight, a tattooed tire repairman from Virginia who talked tough but messed up during the three-part immunity/reward challenge.

Oddly, when his tribe lost, he put his own head on the chopping block to see whether his tribemates would back him over Swan, whom they had been badmouthing throughout the episode. It looked as if the ploy was working, with some colleagues begging him to stay.

But when the votes were counted at Tribal Council, it was unanimous: Zane got the boot.